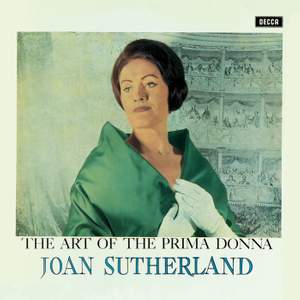 Orchestra and Chorus of the Royal Opera House, Covent Garden

Her incomparable technique, stylistic virtuosity and full-bodied tone were captured at their peak, without any trace of subsequent mannerisms. — BBC Music Magazine, January 2012 More…

"The soldier tir'd of war's alarms"

Joan Sutherland discusses her life and career with Jon Tolansky

Many albums claim to be legendary but few have been as genuinely influential as this one, for singers as for aficionados of opera and the bel canto tradition.

The extensive, carefully-assembled 80-page booklet offers three-language versions of Alan Blyth’s note (from the previous re-issue of this album in 2000) together with an essay from George Hall re-assessing the album 50 years on.

The booklet furthermore offers a host of colour photos and mono photos of Joan Sutherland in various roles featured in this collection; there are also prints and engravings of the singers from bygone eras who who acted as the inspiration for this recording.

Sung texts are included in the original language (plus English translations).

The calibre of presentation befits an artist cherished and admired by all at Decca over her long career.

The accompanying 73-minute bonus interview CD with Jon Tolansky (recorded in 2002) is extensive and revealing, full of musical examples.

The release marks what would have been Dame Joan’s 85th birthday on 7 November. October 10 marks the first anniversary of her death.

Her incomparable technique, stylistic virtuosity and full-bodied tone were captured at their peak, without any trace of subsequent mannerisms.

Vocally, Joan Sutherland was at her freshest when she recorded The Art of the Prima Donna in 1960...Her brilliance in vocal pyrotechnics amazes, and is here matched by the fullness of a fleshy tone rarely heard in such offerings...one of the essential Sutherland albums, topped off here by an valuable interview with Jon Tolansky that includes further examples of the diva's immaculate art.