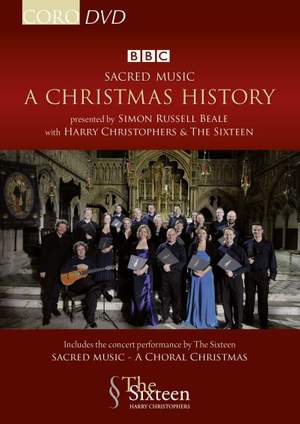 Together [Beale and Christophers] form a fascinating insight into the way Christmas music has developed over the millennia from a fragment of papyrus preserving the earliest known piece of Christian... — Chris O'Reilly, Presto Classical, 5th December 2011 More…

anon.: There is no rose

Harry Christophers and The Sixteen join Simon Russell Beale for two special Christmas programmes that look beyond the familiar carols and festive songs to reveal two millennia of music and texts from across Europe.

· Sacred Music Series One and An Easter Celebration DVD trailers

· Related Recordings by The Sixteen

Simon Russell Beale takes a journey through Italy, Britain, Germany and Austria as he explores how the sound of Christmas has evolved in response to changing ideas about the Nativity. His story takes us through two millennia of music, from a fragment of papyrus preserving the earliest known piece of Christian music to the stories behind Hark! The herald angels sing, Silent Night and In the bleak midwinter, and the work of popular Christmas composer, John Rutter all performed by Harry Christophers and The Sixteen.

Simon Russell Beale introduces a programme of choral music for Christmas from across the centuries, featuring performances of some of the works featured in the accompanying documentary. Harry Christophers and The Sixteen, perform music including J.S. Bach's harmonisation of the medieval carol In dulci jubilo, A spotless rose by Herbert Howells and the Christmas text O magnum mysterium, set as a motet by Tomás Luis de Victoria.

Together [Beale and Christophers] form a fascinating insight into the way Christmas music has developed over the millennia from a fragment of papyrus preserving the earliest known piece of Christian music to the music of the ever-popular John Rutter. En route they journey throughout Europe looking beyond the familiar carols and exploring the rich variety and range of Christmas-inspired music throughout history.

it’s a worthy potted history of Christmas music. Simon Russell Beale is an engaging frontman, largely as he appears to know what he’s taking about rather than blankly reading from an autocue. And the musical extracts are well chosen, notably the third-century Oxyrhynchus hymn, the earliest known preserved piece of Christian music.