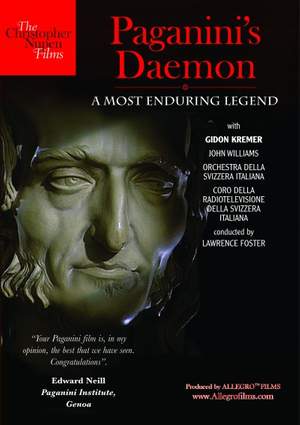 A Most Enduring Legend

“The master of the music doc.” Norman Lebrecht, The Evening Standard

A Christopher Nupen DVD about Niccolo Paganini: the most charismatic figure in the entire history of Western music — also the most talked about, the most controversial, the most famous and the most successful classical soloist that the world of music has ever known.

The story is astonishing, exciting, wildly unusual and, at the end, deeply touching. It is one of the most extraordinary tales in the history of music and it is told with all the Nupen finesse and commitment that have won him DVD of the Year Award four times in the past six years.

Paganini made use of his astonishing gifts, and the gullibility of the world, to create the most elaborate and enduring legend of all instrumental soloists in Western classical music. But, as so often with legends, the excitement and the chatter obscured the true figure of both the man and the artist.

In the film on this DVD, Christopher Nupen looks at the legend and the strange man who created it with his dazzling combination of technical brilliance, supreme showmanship, Italian melody and unbridled manipulative skill — a man whose extraordinary personality unsettled even the most sophisticated and educated minds and provoked wildly contradictory opinions.

The film presents Paganini’s music, shot and edited in the style developed by Christopher Nupen and his colleagues for their prize winning DVDs about Sibelius, Schubert and Tchaikovsky and combines it with extracts from Paganini's letters and quotations from both his admirers and his many detractors. While being hailed as the greatest performing musician of his time, Paganini was denounced again and again by knowledgeable critics as a charlatan in league with the devil and an avaricious man with scant respect for those who responded so enthusiastically to his unforgettable gift — and contributed so readily to his vast personal fortune.

Paganini exploited it all and used the legends to make himself not only the most famous performer of his time, but also the wealthiest by a long, long way. In time this provoked envy and resentment and, finally, a pitiable isolation.

This 1995 film is really a radio talk illustrated with an impressive selection of pictures. Christopher Nupen provides in his usual trademark literate, elegant script a straightforward chronological account of Paganini's career.