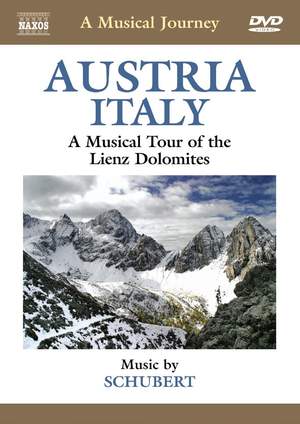 A Musical Tour of the Lienz Dolomites

The Places • In the peace treaty of 1919 the Tyrol was divided into three regions, Southern Tyrol being ceded to Italy. The Eastern Tyrol, Austrian territory, is bounded to the south by the Lienz Dolomites, with the town of Lienz the regional capital. The region is popular with summer visitors, its climate relatively mild, in spite of its height above sea level. There is also a glimpse of the Earth Pyramids at Ritten (Renon) in the Italian Southern Tyrol.

The Music • Music for the tour is by Franz Schubert, the son of a schoolmaster who had settled in Vienna. Although his life was chiefl y spent in Vienna, he was, nevertheless, able to enjoy the Austrian countryside, during country holidays spent with friends. The beauty of the landscape is refl ected in his music and, in particular, in his songs. The tour of the Lienz Dolomites is accompanied by music by Schubert for piano trio, written towards the end of his short life.