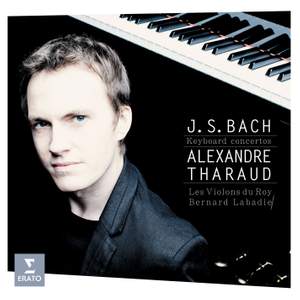 Alexandre Tharaud follows his dazzling album of Scarlatti sonatas with another fusion of modern and historically informed performance styles. Joining him in this new collection of Bach keyboard concertos is the dynamic period-instrument ensemble Les Violons du Roy, under its director Bernard Labadie.

Alexandre Tharaud leads the current generation of pianists who are both reclaiming Baroque keyboard music from harpischordists and integrating historically informed principles into their playing. Exemplifying this fruitful hybrid of modern piano and authentic style is Tharaud’s collaboration in five Bach concertos with one of North America’s most dynamic period-instrument ensembles, the Quebec-based Les Violons du Roy under its director Bernard Labadie.

A bonus item is an arrangement of an arrangement: Tharaud and Labadie have adapted Bach’s transcription for keyboard of an Adagio written by the Venetian Alessandro Marcello (1669-1747). Tharaud describes it as “ a combination of Bach’s solo version and of Marcello’s version for oboe and orchestra – with me playing the oboe line”.

Bach was born in the same year as Domenico Scarlatti, the subject of Alexandre Tharaud’s last Virgin Classics album. As the French magazine Classica wrote of the Scarlatti collection: “Tharaud breaks with received ideas of Baroque repertoire and its interpretation … Wonderfully inspired in variety of touch, tonal precision, ornamentation and resonance. His concerns are not musicological … Above all he aspires to natural phrasing and a balance in the rhythms … His imperious virtuosity is never teasing or mannered … What matters to him is the evocation of colours, simplicity and sensuality. This is a disc to put you on cloud nine.”

In a similar vein, Diapason found that: “There is no question of imitating players whose instruments have plucked strings. Tharaud plays the piano in all its glory, with unbridled imagination. He inhabits the space unoccupied by harpsichordists and expanded by the resources of his own instrument,” while Classique Today judged the album “The most physical, sensual, epicurean Scarlatti you could imagine. His tonal perfection and extraordinary artistic freedom have given us one of the recordings of the year.” The Sunday Times stated that: “Tharaud relishes the rhythmic and melodic riches here. The playing and musicianship of this young Frenchman are dazzling throughout.”

This is a curious mix of compromise and contradiction. The Canadian orchestra Les Violons du Roy plays on modern instruments but uses Baroque bows; modern piano replaces harpsichord as the 'keyboard', but played with stylish, spontaneous-sounding elaboration of lines and sparing use of the sustaining pedal...Yet it all works remarkably well...this is a thoroughly enjoyable 'piano' version of these glorious Concertos.

What comes across irresistably in this new recording is the physical pleasure of playing Bach on a piano...At times he can make even Gould sound a touch stolid...Tharaud's semi-period players help create a tension between new and old that is highly effective.

On this disc the combination of the lean “period” sound of Les Violons du Roy and the clear, crisply articulated and sensitively graduated piano playing of Alexandre Tharaud gives a fresh profile to these Bach keyboard concertos...[in the Concerto for Four Keyboards] which the elegance and agility of Tharaud’s ornamentation really come into their own.

there are remarkable things here. Tharaud’s restraint in the tiny, eloquent slow movement of the F minor concerto is heartbreaking, and the ferocious accuracy of his playing in the finale of the G minor work dazzles...The coordination is flawless, and you can’t help but smile.