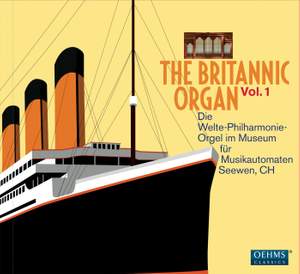 The Britannic Organ, Vol. 1: The Welte Philharmonie Organ in the Museum für Musikautomaten in Seewen

II. The Death of Aase

March on a Theme by Handel, Op. 15, No. 2 (Welte-Philharmonie organ roll recording)

The true identity of the organ featured here was not discovered until 2007. It was originally built in 1913/14 for the “Britannic” ocean liner, sister of the “Titanic”. Because the vessel was used as a hospital ship during World War I, it was probably never installed on the ship’s passenger deck. It has been renovated and called the “Britannic Organ” and is in outstanding condition. Here we have performances by Rumsey, as well as Welte rolls and some of the oldest recordings of historic organists.