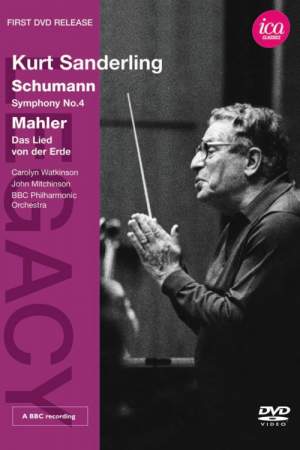 Some of the greatest conductors have worked with the BBC Philharmonic – Sanderling (b.1912), conducting here in 1987, knew the orchestra well having first conducted them some 13 years previously when they were known as the BBC Northern Symphony Orchestra.

Sanderling has had an illustrious career with orchestras such as the Leningrad Philharmonic, Berlin Symphony Orchestra, Dresden Staatskapelle and the Philharmonia, retiring only 9 years ago.

The BBC Legends recording of his Mahler 9 with the BBC Philharmonic from 1982 received excellent reviews.

John Mitchinson, often chosen for the tenor role in Das Lied von der Erde, performed the work many times with the BBC Philharmonic to great acclaim, with two BBC Legends recordings featured in the Penguin Guide – ‘his voice focuses ever more securely through the work with many cleanly ringing top notes’ … ‘John Mitchinson is here at his finest, contrasting his firm, heroic tone in the first song against delicate half-tones, using his head-voice.’

Known for enjoying live performances and having an affinity for late Mahler, Sanderling’s reading of Das Lied von der Erde is inherently musical.

Sanderling makes it all seem relatively effortless, elevating Mahler to the proverbial Olympian heights with no visible means of support...[he] is blessed with singers highly compatible with his interpretation. The versatile tenor John Mitchinson soars comfortably even in the peice's highest registers, and mezzo-soprano Carolyn Watkinson - best known for singing Baroque repertory - brings to Mahler a comparable sense of musical and emotional transparency.