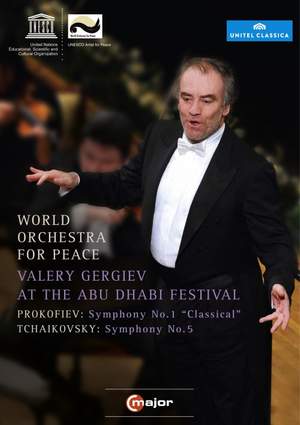 Offer, World Orchestra for Peace at the Abu Dhabi Festival

The programme is both straightforwardly popular and plays to conductor Valery Gergiev's strengths. He and the orchestra whip up a fine storm in the opening of Rossini's William Tell Overture,... — BBC Music Magazine, October 2011, 4 out of 5 stars More…

This DVD includes two major works of Russian repertoire for which Gergiev is famous. While he emphasises the lightness and vitality of Prokofiev’s “Classical” Symphony, Gergiev pours his entire soul into Tchaikovsky’s grand, exultant Fifth Symphony.

Includes a fascinating 23 minutes Documentary about the orchestra, founded by Sir Georg Solti. The orchestra draws its roster from the great orchestras of the world - even the back bench violins are first and second desk players at home.

The Abu Dhabi Festival is regarded as the United Arab Emirates’ largest and most prestigious classical arts event.

“The conductor Valery Gergiev has become one of Russia’s most potent cultural symbols. [...] From the works of Mikhail Glinka to those of Shostakovich, the core of the Russian repertory is infused with a direct emotional appeal. When he conducts those scores (indeed, when he conducts anything), Gergiev is seeking a gut connection between the music and the audience.” The New York Times

The programme is both straightforwardly popular and plays to conductor Valery Gergiev's strengths. He and the orchestra whip up a fine storm in the opening of Rossini's William Tell Overture, are scintillating in the exhilarating finale of Prokofiev's Classical Symphony, and give a stately account of Tchaikovsky's Fifth Symphony...With the Johann Strauss encore...the orchestra lifts spirits with playing which infectiously combines high spirits with professional polish