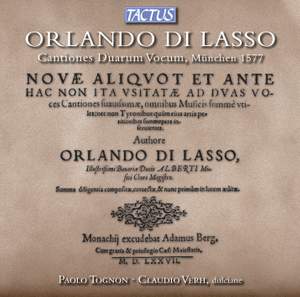 No. 6. Qui sequitur me, non ambulat in tenebris

This is the world premiere recording of Orlando di Lasso’s Cantiones duarum vocum. Published in Munich in 1577, it includes 24 pieces for two voices or instruments without basso continuo. It is performed here on two dulcians (renaissance bassoons) by Paolo Tognon and Claudio Verh.

The composer Orlando di Lasso was born in Mons, Belgium around 1530 and died in 1594. He is today considered to be the chief representative of the mature polyphonic style of the Franco-Flemish school, and one of the two most famous and influential musicians in Europe at the end of the 16th century (the other being Palestrina).