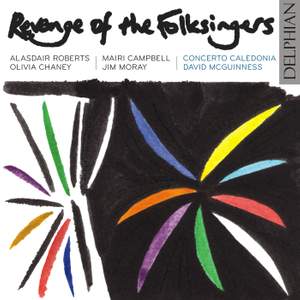 Revenge of the Folksingers

This CD is the result of an unusual collaboration and residency...The material ranges from traditional to newly written, with some less than reverential nods to Britten. The harp-heavy arrangements... — The Times, 9th July 2011, 3 out of 5 stars More…

No. 1, The Salley Gardens

Grotte: My Lord of Marche Paven / Galliard "Or voy-je bien" / The Trees They Grow High

Chaney: Swimming in the Longest River

trad.: Up in the Morning Early

Roberts, A: The Sacred Nine and the Primal Horde

trad.: Laddie Lie Near Me

Chaney: Losing What You Find

trad.: A Scots Tune / O Can You Sew Cushions

“When Bill Lloyd at Aldeburgh Music asked us if we would like to take up a residency there, my first response was ‘Why would we do that?’ I’ve never been altogether convinced by the ‘Let’s go off to the country to discover our true artistic selves’ concept of retreat, suspicious of the notion that you can enhance your work by ignoring the world around you. And why would we travel all the way to Suffolk to rehearse, when we can do that at home? But it didn’t take him long to convince me that this was a proposal loaded with potential, and within a few minutes I was enthusing about the possibilities of reconvening our 17th - century dance band, and developing work with some favourite singers, free from our usual constraints of short rehearsal periods, and, to be honest, of the world around us. Spurred by some less than thrilling performances of Britten’s folksong arrangements heard over the years (and also by Dudley Moore’s parody Little Miss Muffet), we came up with the idea of reclaiming some traditional songs from recital room culture, and of bringing folk singers together with our early music specialists to improvise on some common ground… As the snow continued to fall around us in Snape, we luxuriated in its ideal working environment and freedom from distractions, with additional inspiration coming from the volumes of Britten’s folksong arrangements that we found in the library. The morning after our concert in the Britten Studio, we returned to record this album. Other than a few short sections taken from the live performance, and some bass overdubs a few weeks later, all of the music was recorded in a single day.” David McGuinness

This CD is the result of an unusual collaboration and residency...The material ranges from traditional to newly written, with some less than reverential nods to Britten. The harp-heavy arrangements sometimes veer close to all-purpose Celtic doodling; elsewhere there is a real sense of different traditions finding common ground.