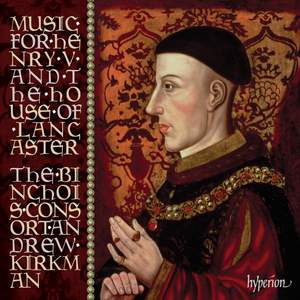 Music for Henry V and the House of Lancaster

The is a magical and moving chance to hear music directly from the circle of Henry V and his son Henry VI...It would be difficult to imagine more tuneful, exacting interpretations of some of... — BBC Music Magazine, October 2011, 4 out of 5 stars More…

anon.: The Office for St John of Bridlington

The Binchois Consort presents a disc which demonstrates the beauty and grandeur of the music performed daily in princely chapels of fifteenth-century England. It illustrates the sheer variety of types of singing, some of it virtuosic in its brilliance. Specifically it offers sacred ceremonial pieces written either for Henry V himself, as King, or to invoke the saintly patron of the House of Lancaster, John of Bridlington, as well as a selection of intricate motets.

Scholarly notes by Philip Weller place this music firmly in its historical context, and the Binchois performances represent the highest standard of early music singing of the present day. Every nuance is considered and each phrase is relished in this immaculately polished disc.

The is a magical and moving chance to hear music directly from the circle of Henry V and his son Henry VI...It would be difficult to imagine more tuneful, exacting interpretations of some of these compositions...this is an adventurous disc which provides a fascinating glimpse into the kind of soundscape that must have greeted Henry V on his return from Agincourt.

The all-male Binchois Consort sing the bellicose king's gruff polyphony with appropriately hard, but not unpleasant tone. They sound fresh off the battlefield...The low tenors peal out the cantus firmus of the mass while eunuchy altos and high tenors weave extended intricate lines over it in phrases arched like an arrow shower...This is an enlightened disc covering an unexplored repertoire.

What stand out are the freshness and vigour of [the Missa's] rhythmic shapes, and the richness of its imitative weaving...As we gear up towards 2015 one can only hope that this beautiful disc will help to give a more rounded picture of the Victor of Agincourt as a musical patron with exquisite taste.

All these works, with their endless rhythmic and melodic variety and dense counterpoint, present considerable challenges in performance...All in all, I think this is The Binchois Consort's best recording yet.

It's subtle, beautiful stuff and no one would doubt its spiritual sincerity...One piece, a setting of the Gloria, is ascribed to "Roy Henry", reckoned to be the king himself; he was quite a composer, if this is anything to go by. The performances are faultless.

This repertoire testifies to the haunting purity of music from the early 15th century...The Binchois Consort under Andrew Kirkman performs with discreet, moving expressiveness.