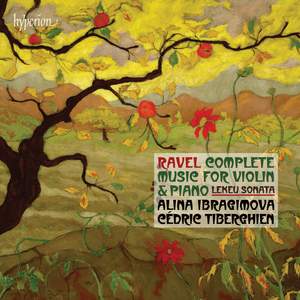 Alina Ibragimova and Cedric Tiberghien are utterly convincing advocates, matching the ebb and flow of this work's intense and slow-burning passion...Ibragimova charms with more than limpid tone.... — BBC Music Magazine, October 2011, 4 out of 5 stars More…

Recording of the Week,  Sublime Ravel from Ibragimova and Tiberghien

Following their outstanding series of Beethoven sonatas from the Wigmore Hall, the Russian violinist and French pianist offer utterly absorbing accounts of Ravel’s complete works for violin and piano, plus Guillaume Lekeu’s Violin Sonata, composed at around the same time as Ravel’s first essay in the genre.

Maurice Ravel’s mature works for violin and piano have established a central place in the core recital repertoire and are considered among the most popular of the genre. These diverse works acknowledge the influences of a range of musical styles from jazz to Impressionism and fuse the tonal colours of Debussy with the lyricism of Franck.

The posthumously published one-movement Violin Sonata, written by Ravel as a student, is a lyrical precursor to the composer’s stunning Violin Sonata in G major with its unique character and adoption of the ‘blues’ idiom. The spontaneity, tonal colours and exotic soundscapes in Ravel’s violin music call for immense skill in interpretation, and passages in the frenzied Tzigane test the limits of the performers’ virtuosity.

Violinist Alina Ibragmiova rises to these challenges with extraordinary verve. Recent winner of the Royal Philharmonic Society’s prestigious ‘Young Artist of the Year’ award, she displays a vast expressive range and interpretative maturity.

She is accompanied by pianist Cédric Tiberghien, who gives elegant and flawless performances and relishes Ravel’s iridescent piano parts.

The addition of Guillaume Lekeu’s masterwork, the extensive and engaging Violin Sonata, makes this major new release a chamber disc to treasure.

Alina Ibragimova and Cedric Tiberghien are utterly convincing advocates, matching the ebb and flow of this work's intense and slow-burning passion...Ibragimova charms with more than limpid tone. Whether it is the willingness to sound dirty in the 'blues', or the hushed caresses in the heart of the posthumous Sonata, it is clear she is under the skin of this music.

Alina Ibragimova and Cédric Tiberghien possess the rare gift of being able to recreate on disc the same captivating spontaneity and musical intensity that distinguishes their concerts. Rarely have the sleek lines and textures of Ravel's two sonatas, nor the manic drive of Tzigane so deliriously intoxicating.

Ibragimova brings verve and virtuosity to the Violin Sonata, abetted by Tiberghien in a nicely understated “Blues” movement. Their Tzigane makes up in brilliance what it lacks in earthiness

Tiberghien and Ibragimova certainly don't hold back from sweeping intensity but they still retain a measure of objectivity, finding places to relax and never pushing the expression beyond what sounds beautiful...the details are wonderfully idiomatic...It all adds up to a must-hear recital

Ibragimova’s tone is taut, sweet and astringent, but with plenty of power in her bowing arm in the last, très animé movement [of the Lekeu]...while Tiberghien’s limpid touch and easy bravura are perfect for this music.

Lekeu's magisterial, post-Wagnerian Sonata displays a supremely natural sense of ebb and flow. The performance is particularly strong, with Ibragimova and Tiberghien alert to its underlying logic and self-conscious rapture. The Ravel is superbly done, too. Above all, the Tzigane is the real showstopper here: Ibragimova dispatches it with breathtaking dexterity.

Even within the Ravel repertoire, they sharply identify and convey the distinct contrasts...They have great fun with the wild gipsy flair of Tzigane, but you can tell that this spontaneity is born of deep understanding of the music’s character and of unshakeable rapport. In the entire programme the playing is of finesse and winning,communicative allure.

The couple recently stirred excitement with their accounts of Beethoven’s sonatas — each sonata freshly thought and felt. Now, a similar miracle is worked upon Ravel... The solo section of the Tzigane gives Ibragimova her big spotlight, spinning with gypsy trills. But Tiberghien throughout fields his own sensitivities and urgent attack; this CD is a joint triumph.