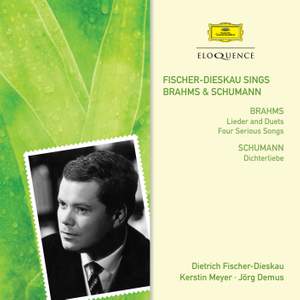 A moving Brahms Four Serious Songs from a young and physically impassioned Fischer-Dieskau, and a fascinatingly exploratory Dichterliebe from 1957, both incomparably accompanied. — BBC Music Magazine, June 2012, 5 out of 5 stars More…

‘You sing as if you had written it yourself!’ Jean Cocteau once told Dietrich Fischer-Dieskau. This anthology of lieder by Brahms and Schumann is a prime example of the great singer doing just that, mining every nuance of emotion from a song while, at the same time, sounding as spontaneous and free as if he were making it up on the spot. One of the hallmarks of Fischer-Dieskau’s legacy is the ease with which he creates the spell of each individual song, drawing the listener – apparently effortlessly – into the drama created by the words and the music.

Fischer-Dieskau recorded extensively for Deutsche Grammophon, and the bulk of his archive has been mined on CDs. These recordings, however, are rarities. The songs on CD1 appeared only as part of the Fischer-Dieskau Edition for his 75th birthday. The Brahms songs on CD2 make their first appearance on CD. And the 1957 recording of Schumann’s Dichterliebe with his long-time pianist Jörg Demus, only appeared as part of Deutsche Grammophon’s centenary edition. CD2 includes the Four Duets, Op. 28 in which Fischer-Dieskau is partnered by an artist not heard enough on records, the contralto Kerstin Meyer.

This release marks the launch of an Eloquence series of notable recitals of songs and opera arias by some of the great voices of Decca and Deutsche Grammophon.

A moving Brahms Four Serious Songs from a young and physically impassioned Fischer-Dieskau, and a fascinatingly exploratory Dichterliebe from 1957, both incomparably accompanied.

this is a masterly performance, a towering interpretation of these dark, noble songs