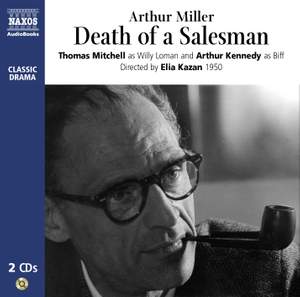 'Just wanna be careful with those girls, Biff…'

'Why didn't I go to Alaska with my brother Ben that time?'

'Was rich. That's just the spirit I wanna imbue them with.'

'Let me tell you a story Howard.'

In a small restaurant Biff arrives and finds Happy…

'I'm saying goodbye to you Pop…'

'That boy… that boy is going to be magnificent.'

It was a quiet funeral.

Arthur Miller’s most famous play, Death of a Salesman, has become a key text in Western literature. This unusually powerful recording, made for radio in 1953, was directed by Elia Kazan who premiered the play. It features Thomas Mitchell and Arthur Kennedy as father and son. Willy, a travelling salesman, based in New York, relentlessly chases material success. As the disappointing nature of his reality crowds in upon him, Willy and his family suffer the tragic cost of his delusions of greatness. A domestic tragedy, a cynical indictment of materialism and the American Dream, and a profoundly moving story of one man’s struggle to maintain his dignity in the face of continual adversity – Miller’s play is essential listening.