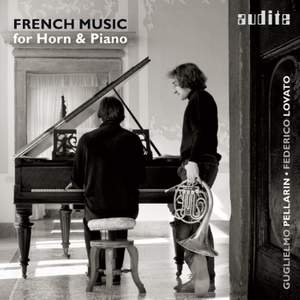 This collection of pieces from the 19th and 20th centuries is intended to display the increasing range and versatility of the French horn following the addition of valves to the instrument –... — The Independent, 29th July 2011, 3 out of 5 stars More…

This selection of French music for horn and piano reveals the increasing variety in sound which the horn was able to produce thanks to the invention of valves.

The history of the horn and its technical development has been of particular importance to French music. In contrast to Germany, horn players in France initially declined to use the valved horn after its invention in the 19th-century, which was reflected in the style of contemporary composition.

Juxtaposing works for horn and piano of the 19th and 20th centuries allows an insight into the different playing techniques of the instrument and its development from natural to valved horn, the turning point of which is exemplified by Paul Dukas’ Villanelle.

The two Italian musicians Guglielmo Pellarin (horn) and Federico Lovato (piano) are making their joint recording début with this disc and have also chosen rarely heard works by the contemporary French composers Jean-Michel Damase and Jean-Michel Defaye, featuring surprisingly jazzy elements. The Sonata for Horn and Piano by Jean-Michel Damase is a première recording. Guglielmo Pellarin is principal horn of the Orchestra dell’Accademia Nazionale di Santa Cecilia in Rome. He also regularly performs with the Symphonica Toscanini, the orchestras of the Teatro Verdi di Trieste and the Teatro alla Scala di Milano and the Filarmonica della Scala under conductors including Lorin Maazel, Zubin Mehta and John Eliot Gardiner. He has won many prizes and has toured Italy, Austria, Slovenia and Canada.

Federico Lovato studied piano in Venice and Imola. He has won numerous national and international competitions. He has given solo and chamber performances throughout Italy and Europe, including at the Gasteig in Munich, Teatr Mały in Warsaw, Teatro alle Erbe in Milan and Sala Mozart in Bologna. His repertoire spans from classicism to contemporary music. In addition to his career as concert pianist he teaches and is the Artistic Director of the orchestra I Solisti in Villa.

The familiar (to horn players at least) nestles alongside a couple of welcome rarities in this impeccably played horn and piano recital...Pellarin is principal horn of the Orchestra dell’Accademia Nazionale di Santa Cecilia, and his expressive, very European sound is captured close-up. Which means here that there’s a lovely, breathy softness to the horn tone, especially when it’s played quietly...Pellarin’s fruity low register delights