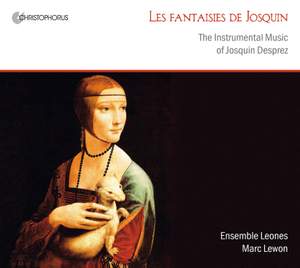 The Instrumental Music of Josquin Desprez

Josquin: La plus des plus

The debut CD of Ensemble Leones is devoted to one of the key composers responsible for the blossoming of instrumental music: Josquin Desprez (c1450-1521). This is intended as a fitting tribute to his previously neglected secular instrumental works, which were compiled in 14 musical blocks: in many cases, a simple monodic (folk) song provided the model for Josquin’s polyphonic elaboration, permitting a sort of ‘theme with variations’.

The bonus track presents a new composition “Sei gelobt, du Baum“ by Arvo Pärt. It is written for two instruments, Baroque violin and Renaissance gittern, both of which were made from the wood of a 2000-year-old piece of silver fir timber from a vineyard in Switzerland. The composition binds together the old instruments and tonal quality of the early music ensemble with the present day.