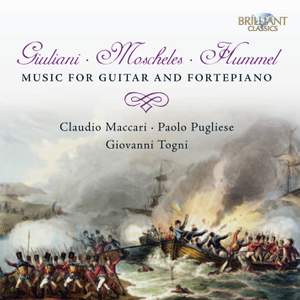 The 19th century Italian guitar virtuouso Mauro Giuliani wrote many works for guitar in combination with other instruments, but very few are for guitar and keyboard. This rare recording includes four such works, three of which were written with other composers: Ignaz Moscheles and Johann Nepomuk Hummel. The new release adds to the growing collection of Giuliani recordings on Brilliant Classics.

The Grand Duo Concertant is a joint composition by Giuliani and the pianist Ignaz Moscheles, and was dedicated to the Archduke Rudolf of Austria, to whom Beethoven dedicated his own ‘Archduke’ Trio. Moscheles was only nineteen at the time, and his youthful enthusiasm can be heard in the verve and energy of the piano part. It is a delightful piece, with perfect balance between the two instruments, and the romantic third movement, Largo espressivo, is hauntingly beautiful.

The charming and humorous Due Rondò is the only known work by Giuliani for guitar and keyboard which appears to be his work alone. The Grand Pot-Pourri National is a lively medley of tunes taken from various countries: Polacca, ‘Rule Britannia’, ‘Vive Henri Quatre’, Bolero, the Austrian national anthem, and a tarantella, which provides a splendid climax to the piece. It appears that the keyboard part for this work may have been composed by Hummel and not Giuliani.

The final item is an arrangement of Giuliani’s set of variations on ‘Partant pour la Syrie’, which he originally composed for solo guitar. There is some uncertainty about whether the Variations Op.104 for guitar and keyboard are actually by Giuliani, as they were only published years after the composer’s death.

Claudio Maccari and Paolo Pugliese are 19th century guitar specialists, as well as highly respected musicologists and teachers, who play original gut-stringed instruments, including guitars belonging to Giuliani himself. They are joined by early music specialist Giovanni Togni on the fortepiano.