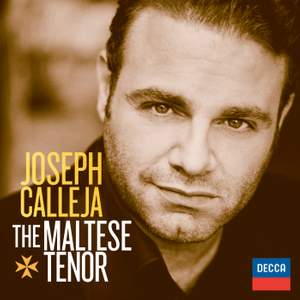 The two Mefistofele arias receive near-ideal performances, the Pearl Fishers romance (one of two items in which soprano duties are nicely undertaken by Aleksandra Kurzak) is enchanting, and the... — BBC Music Magazine, August 2011, 4 out of 5 stars More…

The career of Maltese tenor Joseph Calleja seems to have no limits, with performances at the world's greatest opera houses and acclaim for the lyrical warmth of his singing from the press and public alike. In Summer 2010 he triumphed in London performances of Verdi’s Simon Boccanegra alongside Plácido Domingo, after which The Independent observed that Calleja “almost steals the show”.

Joseph Calleja is an enthusiastic ambassador for Malta, where he still lives - an island with a proud operatic tradition. In addition to his international appearances, Joseph Calleja has established an annual open-air event in Malta's historic capital Valetta, which has become a focus for the musical life of the island.

Joseph Calleja's opera and concert successes are now crowned by a new recording. His third Decca album captures the development of his art and presents him in some of the roles he is currently performing to ecstatic critical responses: “All the ardor and beauty of tone one could wish for...one of the finest lyric tenors before the public today” (Houston Chronicle on recent performances of Puccini's Madama Butterfly)

The two Mefistofele arias receive near-ideal performances, the Pearl Fishers romance (one of two items in which soprano duties are nicely undertaken by Aleksandra Kurzak) is enchanting, and the cavatina from Gounod's Faust is appealingly shaped and crowned with a refined top C...Calleja continues to persuade with a good sense of style.

He's an artist who has developed in leaps and bounds over the last few years, and who sings with freedom, passion and elegance. His narrow, fast vibrato has a pleasantly old-fashioned sepia-tinted feel about it, and links him to an earlier generation of tenors...It's a recital which shows off Calleja's rich, rounded and ringing sound at its best.

Calleja can still get down to a pianissimo in a way that few can, such as in the Luisa Miller scene, which is one of the best items thanks to the way he gives the vocal line a flattering lilt. After his Covent Garden success in Simon Boccanegra, the inclusion of the Act 2 scena "O inferno" - another high-point - will be a welcome souvenir.

Calleja's timbre, brilliant, caressing, keenly focused, is entirely individual...All in all, this is a fine calling-card for a tenor, still only in his early thirties, on the threshold of greatness, during a transition phase of his career. The portents are exciting indeed.

his is a bright, warm, unmistakably Mediterranean timbre, with a distinctive quick vibrato that recalls great tenors of the wind-up-gramophone era. Yet he is a thoroughly modern musician...His Che gelida manina is surely the most glamorous and thrilling on disc since Pavarotti’s famous complete recording, but it is no carbon copy...In short, a golden-age voice in its prime.

Calleja despatches [the programme] with bags of elegance, passion and charm...it's the French arias here that leave you wanting more: his is a beautifully characterised Légende de Kleinzach from Offenbach's The Tales of Hoffmann, and a sexy Ah! Fuyez, Douce Image

[in the French roles] he shows no cramping of his natural bel canto style by the French line, finding plenty of room to manoeuvre. And when he and the soprano Aleksandra Kurzak begin their dalliance, the chemistry is sublime. Elsewhere, the various Puccini arias from Tosca and Manon Lescaut present Calleja at his best: robust and resonant.

Calleja commands resinous, vibrant tone with a rich top register and generous, open-hearted style. This is technically sturdy singing with guts and heart.

The Independent on Sunday 21st August 2011

The solidity of his technique is evident in this calorific recital: it takes muscle to support such delicate messa di voce. There's a rare, old-fashioned sweetness of timbre