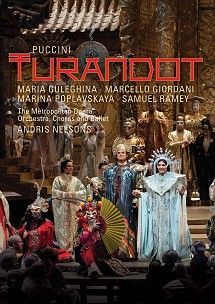 Franco Zeffirelli’s magnificent staging of Puccini's final opera — a fairy tale set in a mythical China — is one of the most popular in the Met repertory. In this Live in HD production, Maria Guleghina takes on the title role and Marcello Giordani is Calaf, the unknown prince. Marina Poplavskaya and Samuel Ramey co-star, and Andris Nelsons conducts in his Met debut.

Zeffirelli's classic 1990s Met production, unashamedly glitzy, crowded and spectacular comes up remarkably fresh in this second video incarnation...Guleghina's ice-princess is intensely feminine...Giordano cuts a charismatic stage figure, and 'Nessun dorma' stops the show...What really makes this production is the vividness with which it's communicated, both in the exceptional high-definition picture and spacious sound.

Zeffirelli's ultra-lavish traditional production hovers between gorgeously extravagant and amusingly overdone. It's kept in check by three terrific performers in the main roles. Maria Guleghina soars effortlessly through the cruelly demanding title role...Poplavskaya is wonderfully affecting both dramatically and vocally as the innocent young Liu...[Nelsons] provides some surprising subtlety among the necessary broad brush-strokes.

the production's brain-flooding panorama of ancient China...matches the sumptuousness of Puccini's score...[Guleghina and Giordani are] both fairly new to their roles and singing them with a sense of new discovery...In the secondary roles, Marina Poplavskaya and Samuel Ramey are certainly A-team talents...Nelsons finds layers of sound and meaning unlike anything I've heard since Karajan's audio recording on DG

the 22-year-old extravaganza has lost none of its razzle-dazzle...in the opera house one can't take it all in...Perhaps home viewing is the best route - when soloists sing, the camera hones in on them...The stars of the evening are conductor and second soprano...[Poplavskaya] acts convincingly, looks wonderful and sings with great warmth and sure technique..,[Nelsons] rises to each occasion, but he also pays heed to Puccini's delicate colorations