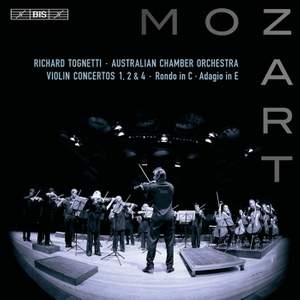 Tognetti and the admirable Australian Chamber Orchestra aim at a synthesis between 'authentic' and modern performance styles of Mozart...above all, these are interpretations which take their... — BBC Music Magazine, October 2011, 5 out of 5 stars More…

Completing the cycle of Mozart’s violin concertos, begun on BISSACD1754, Richard Tognetti and his Australian Chamber Orchestra offer us the first, second and fourth concerto, along with two shorter works for violin and orchestra: the Adagio in E major and the Rondo in C major.

All Mozart’s works in this genre were written during a few years quite early in his career and demonstrate very clearly Mozart’s tremendous development - the fourth concerto in particular displays the confidence of the composer both in handling his material and in teasing the audience with the narrative he creates.

Tognetti writes of his and the orchestra’s decision to use gut strings, period wind instruments and a lower than usual pitch, in aim to create ‘a sound which we know Mozart would have recognised… while simply looking at the notes Mozart wrote down, and start from there, creating a hybrid hopefully carrying an embodiment of truth’.

Tognetti and the admirable Australian Chamber Orchestra aim at a synthesis between 'authentic' and modern performance styles of Mozart...above all, these are interpretations which take their point of departure from the music itself, more than from theories of what it might - or might not - have sounded like in Mozart's day.

[Tognetti] emphasises in his booklet note that his purely musical responses were governed not by dogma but sheer intuitiveness. The results combine the best of both worlds, benefitting from the lighter touch and airier textures of authenticism, yet expressed with an emotional warmth and spontaniety...it is difficult to imagine a more beguiling set of performances.

Tognetti is named as "lead violin". But the intelligent, recreative exchange he inspires suggests a musician conducting from his instrument. There are no perfunctory notes or turns of phrase. Modulations are acknowledged by mutations in tone colour and dynamics, and bar-lines all but disappear in the wake of tractable tempi.

The ensemble’s precision and energy make the three on this recording sound more like beefed-up string quartets, with all traces of gentility stripped away. An exhilarating disc.