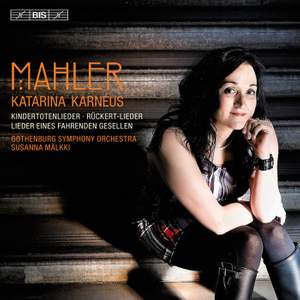 Karnéus is delightfully taut of rhythm in 'Blicke mir nicht in die Lieder', which she places first. And the orchestral accompaniment here is painstaking. — BBC Music Magazine, September 2011, More…

Swedish Mezzo-soprano and former winner of BBC Cardiff Singer of the World Competition, Katarina Karnéus is joined on this disc by the Gothenburg Symphony Orchestra and Finnish conductor Susanna Mälkki to perform three of Gustav Mahler’s orchestral songs.

As a composer, Gustav Mahler was absorbed by song and symphony as complementary genres deeply involved with each other. In his first symphony, Mahler included two themes from the song cycle Lieder eines fahrenden Gesellen, originally scored for voice and piano, which he had recently composed to his own poems. It was perhaps the experience of orchestrating these themes in his symphony that a few years later inspired Mahler to create the version for voice and orchestra.

All of the songs in Kindertotenlieder and Rückert-Lieder are settings of poems by the poet Friedrich Rückert, composed between 1901 and 1904. For Kindertotenlieder (Songs of the death of children) Mahler chose five of more than four hundred poems written by Rückert in reaction to the death of his two children: poems of despair, disbelief and resignation.

While Kindertotenlieder was conceived as a cycle, the Rückert-Lieder are more loosely connected with each other and they include some of the most sublime Mahlerian moments, for instance in Ich bin der Welt abhanden gekommen.

Karnéus is delightfully taut of rhythm in 'Blicke mir nicht in die Lieder', which she places first. And the orchestral accompaniment here is painstaking.

The split threads of Mahler's orchestral nerve-ends are teased so thoroughly and with such interest by the orchestra and the BIS engineers that more than several listenings are required to assimilate them. Susanna Mälkki favours an Expressionist level of detail that casts louring shadows over even the blue flowers and green fields of the Wayfarer's first song...Karnéus is a secure and heartfelt interpreter.

Karnéus is at her best in one or two obvious places, and one or two less obvious ones...['Ich bin der Welt'] seldom fails in performance, and here her warm mezzo spins an ethereal thread of golden tone that perfectly matches the sentiments...['Um Mitternacht'] is heart-rending, and the great cry of the final stanza is magnificent...the playing of the Gothenburg Symphony Orchestra throughout is as other-worldly as Mahler might have dreamed.

she sings them as beautifully as any contemporary female interpreter, with her smoky vocal colouring, her careful enunciation of the texts and her feeling for the heart-rending pathos of the music...there is a unity of purpose in these readings that makes them a must-hear for dedicated Mahlerians.

The recorded sound is wonderful, and Finnish conductor Susanna Mälkki coaxes a sound of golden warmth from her Swedish orchestra. Swedish mezzo-soprano Katarina Karnéus makes a sound as rich and glossy as a thoroughbred’s coat.