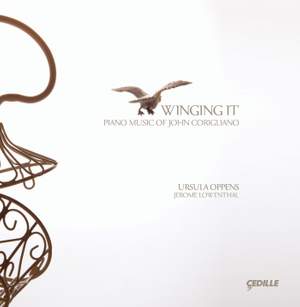 Corigliano, J: Fantasia on an Ostinato

No. 1. For the Left Hand Alone

This new CD of piano music by the widely celebrated American composer John Corigliano (b. 1938) includes the world premiere recording of Winging It (2008), an improvisation-based piece written for the eminent American pianist Ursula Oppens, who also gave the work its concert premiere. Ms. Oppens has been a champion of contemporary composers and new music throughout her career.

Corigliano’s Etude Fantasy (1976) takes the listener on an excursion through intriguing studies in left-hand scoring, contrapuntal clarity, ornamentation, and melody.

Corigliano wrote Fantasia on an Ostinato (1985), his “only experiment in ‘minimalist’ technique,” for the seventh Van Cliburn International Piano Competition to challenge the contestants’ imagination and musicality.

Corigliano has composed only two works for two pianos, and both are heard on this new CD in performances by Ms. Oppens and her longtime collaborator Jerome Lowenthal. Corigliano’s youthful, high-spirited Kaleidoscope (1959) projects a changing mosaic of colorful patterns. In the boldly inventive Chiaroscuro (1997), the pianos are tuned a quarter-tone apart; their altered states produce other-worldly results.

Winner of an Academy Award, four Grammy Awards, and a Pulitzer Prize, Corigliano (b. 1938) has written more than one hundred scores. His music has been performed and recorded by many of the world’s most prominent orchestras, soloists, and chamber ensembles. According to the All Music Guide, Corigliano ranks among “the few ‘serious’ contemporary composers whose appeal has ranged beyond the new-music crowd to reach listeners steeped in more traditional, time-tested fare.”