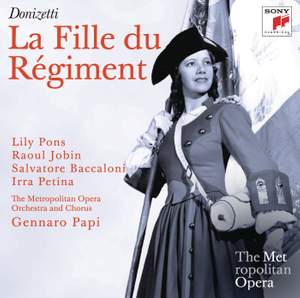 Beloved soprano Lily Pons was at her most charming and vivacious in this performance, her house role debut as the titular heroine, Marie, and her only Met broadcast in the role. The cast for this centennial production of Donizetti’s opera also includes Raoul Jobin as Tonio, Salvatore Baccaloni as Sulpice, and Irra Petina as the Marquise of Bernkenfield. Gennaro Papi leads the Metropolitan Opera Orchestra and Chorus. For this run of performances, Pons interpolated one of her signature arias, “Toi par qui mon coeur rayonne,” originally from the French version of Donizetti’s Lucia di Lammermoor, into the third act. In his New York Times review, Olin Downes captured the enthusiastic audience reaction to this World War II-era performance: “[Pons] waved the French colors at the end, to the tune of the Marseillaise, and brought the audience up standing."