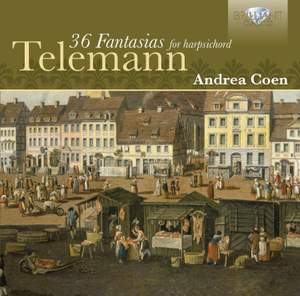 His harpsichord, a period reproduction, has an almost fluorescently bright sound and a fairly noisy action, but Coen, an experienced, insightful instrumentalist with a profound knowledge of historical... — MusicWeb International, June 2012 More…

Telemann: Fantasia for harpsichord No. 4 in E minor, TWV 33:4

Telemann: Fantasia for harpsichord No. 5 in F major, TWV 33:5

Telemann: Fantasia for harpsichord No. 8 in G minor, TWV 33:8

Telemann: Fantaisie in A major, TWV 33:9

While Telemann is, today, considered among the very greatest of Baroque composers, he was one of the last of the period to be reappraised by later generations, and his music had to be ‘rediscovered’, just as that of J.S. Bach and Vivaldi was. Despite this, he enjoyed a great deal of fame during his lifetime, and his long career resulted in a vast output. He was, in fact, one of the most prolific composers of any age, and travelled widely, assimilating different styles into his own compositions. This allowed him to produce music of such individuality and quality, with a noticeable sense of ease, that it must have astonished his colleagues and patrons, as it does us today.

The 36 Fantasias for harpsichord were published in 1732/3, and are divided into three groups of 12 – the second set is in the French style, while the outer sets are in the Italian style. Each fantasia closes with a da capo repeat of the first movement, expertly and sensitively embellished by harpsichordist Andrea Coen.

These are energetic and energising works, at once intellectual and entertaining ‘so that the player enjoys them, and you can take pleasure from that (because) variety revives the spirit’ as Telemann commented.

For the first time complete on a 3-CD set: the Fantasias TWV 33 by Telemann.

As always with Telemann (always a bit in the shadow of the great J.S. Bach and Handel...) a surprise: high quality keyboard works of great virtuosity and invention.

Andrea Coen knows the style inside out, as proven by his many recordings, among which the Complete Sonatas by Giustini, which got rave reviews by the international press.

His harpsichord, a period reproduction, has an almost fluorescently bright sound and a fairly noisy action, but Coen, an experienced, insightful instrumentalist with a profound knowledge of historical performance practice and a sackful of important recordings under his belt, could make Telemann sound special even on a typewriter.