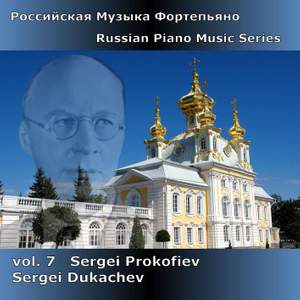 Dukachev [is] a virile interpreter of the music of his homeland. He races into a truly exciting reading of the second piano sonata before exploiting every opportunity offered by the 20 tiny pieces... — The Observer, 14th August 2011 More…

No. 10. Romeo and Juliet before Parting

Prokofiev is regarded by many as one of the most complex and progressive composers of the early twentieth century. His catalogue of music numbers some 135 works in such varied genres as symphony, sonata, ballet, opera, art-song, string quartet and film music. He was one of the last in a long tradition of pianist-composers and the nine piano sonatas are all testament to the quality and fertility of the composer’s mind. Prokofiev’s output within the piano sonata genre represents the most important and influential in the Twentieth Century.

His melodic, rhythmic and harmonic material encompasses a new world, far removed from the conventional romantic ideals of the time. The structure of this sonata is conventional but the unusual sonorities, juxtaposition of harmonies and syncopated rhythmic patterns all come together to produce a radical style of composition.

However, despite all of these new ideas, tonality as a structural base is essential for Prokofiev in all his works.

Sergei Dukachev was born in Magnitogorsk, a city in the Ural Mountains on the border between Europe and Asia, where he began to learn the piano at the age of six. In 1989, he distinguished himself by being a prize winner in the International Beethoven Competition in Vienna.

Sergei developed close artistic links with Britain during his years at the Moscow Conservatoire, and in the late 1990s, began a series of annual visits to give concerts in England. Now a sought-after performer in England, Sergei’s appearances have included illustrated talks and masterclasses at many venues – in particular the Chetham’s Summer School in Manchester.

Dukachev [is] a virile interpreter of the music of his homeland. He races into a truly exciting reading of the second piano sonata before exploiting every opportunity offered by the 20 tiny pieces that make up Visions Fugitives to display his colourful pianistic palette.