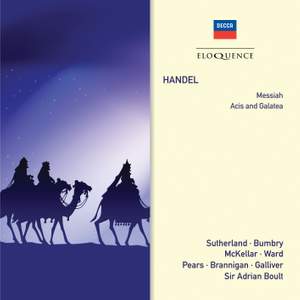 The cast selected for this recording is excellent, and each of the four principal singers possesses a telling dramatic style as well as a fine command of phrasing and timbre. Joan Sutherland... — Gramophone Magazine More…

Aria. Every Valley Shall Be Exalted

Chorus. And The Glory Of The Lord

Aria. But Who May Abide The Day Of His Coming?

Chorus. And He Shall Purify

Recitative. Behold, A Virgin Shall Conceive

Recitative. For, Behold, A Darkness Shall Cover the Earth

Aria. The People That Walked In Darkness

Chorus. For Unto Us A Child Is Born

Recitative. There Were Shepherds Abiding In The Field

Recitative. Then Shall The Eyes… He shall feed

Chorus. His Yoke Is Easy, And His Burthen Is Light

Chorus. Behold The Lamb Of God

Aria. He Was Despised

Chorus. And With His Stripes We Are Healed

Recitative & Chorus: All they that see him.. He trusted in God

Arioso. Behold, And See If There Be Any Sorrow

Recitative and Air: He was cut off..But thour didst not leave

Recitative & Chorus: unto which of the angels...Let all the angels of God

Air: Thou art gone up on high

Chorus: The Lord gave the word

Aria. How Beautiful Are The Feet Of Them

Chorus. Their Sound Is Gone Out Into All Lands

Aria. Why Do The Nations So Furiously Rage

Recitative & Air: He that dwelleth in heaven..Thou shalt break them

Aria. I Know That My Redeemer Liveth

Chorus. Since By Man Came Death

Recitative & Air: Behold, I Tell You A Mystery… The trumpet shall sound

Recitiative, Duet & Chorus: Then shall be brought…

Aria. If God Be For Us, Who Can Be Against Us?

Chorus. Worthy Is The Lamb

Chorus: Oh, the pleasure of the plains!

Air: Where shall I seek the charming fair? (Acis)

Air: As when the dove laments her love (Galatea)

Accompagnato: I rage - I melt - I burn! (Polyphemus)

Air: Cease to beauty to be suing (Polyphemus)

Would you gain the tender creature (Coridon)

Trio: The flocks shall leave the mountains (Galatea, Acis, Polyphemus)

Sir Adrian Boult made a selection of Decca recordings in the 1950s and 60s ranging from Baroque repertoire (Bach, Handel) to the music of the 20th century – most notably the first eight Vaughan Williams symphonies. Coupled together for the first time on CD are his two major Handel recordings for Decca – of the oratorio Messiah and the pastoral masque Acis and Galatea. Messiah is performed in unashamed grand tradition and this reissue is notable for the fact that it includes, as a bonus track, the first ever release of the tenor version of the recitative and arioso ‘Thy rebuke … Behold and see’. The alternative version for soprano was chosen for the main recording and this wonderfully pliant reading by Kenneth McKellar will come as a revelation to many. Joan Sutherland appears on both works and the rest of the cast includes several notable singers living and/or working in England at the time – Peter Pears, David Ward, Owen Brannigan and David Galliver. The booklet includes the original notes as well as full texts for both works.

The cast selected for this recording is excellent, and each of the four principal singers possesses a telling dramatic style as well as a fine command of phrasing and timbre. Joan Sutherland is a perfect Galatea; her voice conveys magisterially that somewhat difficult ideal—not a simple country girl, but an eighteenth-century actress playing in a slightly sophisticated manner at being what she knows perfectly well she is not. […]crisp and incisive playing when it is needed, and pathos rich in sonority where the score and the sentiment demand it … special praise must go to Thurston Dart’s witty harpsichord continuo realisations, and Handel lovers of any vintage will probably enjoy Owen Brannigan’s s bluff and swaggering Polyphemus.