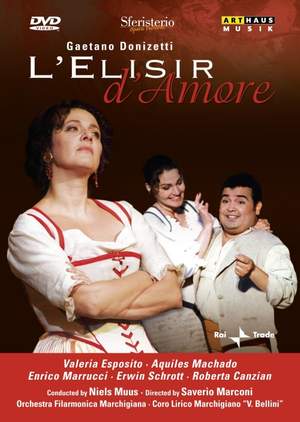 Slowly the camera roams through the narrow streets of Macerata, past the cathedral, the monuments, the library and the university, until it reaches the Arena Sferisterio. In the 1820s this was a competition venue for a handball game popular at that time. At the beginning of the twentieth century the ‘neo-classical monster’, as the stadium is disrespectfully called in the vernacular, was also discovered as an opera venue and a dazzling backdrop for the ‘Macerata Opera Festival’. The stage, which is 14.5 meters deep and 40 meters wide, is sufficiently large for all kinds of events and spectacles to be staged.

At the end of July 2002 the time had come again. An audience of 5000 had gathered to listen to the new production of Gaetano Donizetti’s L’elisir d’amore under the direction Saverio Marconi, conducted by Niels Muus. Using a trick the director succeeded in preserving the open-air atmosphere while at the same time eliminating the annoying echo of the voices and instruments. The orchestra was seated in an enormous box that was put on the stage, while the singers, in traditional costumes by Silvia Aymonino, performed on stage in front of it, among them the young Valeria Esposito as Adina, Aquiles Machado in the role of Nemorino, Enrico Marrucci as Belcore and the very young Erwin Schrott as Dulcamara.

The premiere of Donizetti’s L’elisir d’amore in the Teatro della Canobbiana in Milan on 12 May 1832, was an unqualifi ed success; it resulted in a series of 32 sold-out houses for the composer and even inspired Richard Wagner in 1840 to produce a piano score of the work.