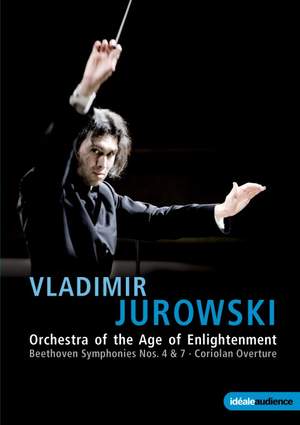 Orchestra of the Age of Enlightenment, Vladimir Jurowski

The sound is magnificent...The performances are well-crafted, and the camerawork shows just enough for Jurowski fans of his well-choreographed conducting...it is worth hearing just for the wonderfully... — BBC Music Magazine, August 2011, 4 out of 5 stars More…

Vladimir Jurowski conducts Beethoven gathers the lesser known Symphony No. 4 - composed when Beethoven was enjoying one of the most peaceful time of his life - with the celebrated Symphony No. 7 and the Coriolan Overture.

For this performance filmed live at the Théâtre des Champs-Elysées in Paris, Vladimir Jurowski chose to collaborate with the musicians of the world famous Orchestra of the Age of Enlightenment who perform on period instruments, shedding a radically different light on works that we are so accustomed to hear on modern instruments.

The sound is magnificent...The performances are well-crafted, and the camerawork shows just enough for Jurowski fans of his well-choreographed conducting...it is worth hearing just for the wonderfully rasping horns in the Trio, and the especially beautiful account of Symphony No. 4

how lucky the Parisians were to experience this magnificent concert. It begins with the Coriolan overture, passion offset by delicate, liquid playing from the woodwind...The Seventh Symphony is even better. Jurowski keeps an iron grip on the dancing rhythm of the first-movement Vivace, screwing up the tension with the minor-and-major-second clashes in the development section