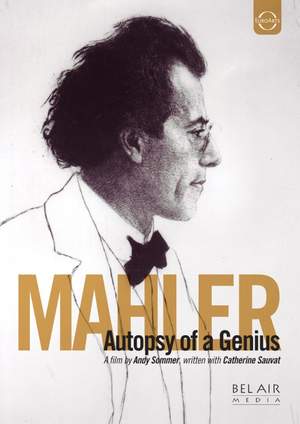 Despite the title, a straightforward if oddly gappy account of Mahler's life and works, mostly in French, with high-class performance clips, landscape shots, and expert comments by Henry-Louis... — BBC Music Magazine, September 2011, 4 out of 5 stars More…

A Film by Andy Sommer

Director Andy Sommer is known for his sensational musical documentaries on the immortals Mozart, Beethoven, Schubert and Berlioz. Today he tackles the mythical Gustav Mahler, proposing a cinematic autopsy of the many facets of this musical genius, who was at once composer, orchestra conductor and opera house director.

The film proposes to make the autopsy of this genius composer and takes us on a journey to the heart of Mahler’s world, going beyond the legends and clichés, and drawing on the latest research to create a portrait that brings us as close as possible to the man Mahler really was.

The film includes the participation of prominent Mahlerian personalities, as Henry-Louis de la Grange, paired with a visually spectacular, accessible dramatisation directly related to Mahler’s music and images inspired by 1900 Vienna’s enduring modernity and “Nature” which always plaid a special role in the Mahler’s inspiration.

The film continues its ‘autopsy’ of the man beyond his death, retracing interpretations of his music by different orchestra conductors up to the present day: from Bruno Walter, Willem Mengelberg to Leonard Bernstein… and from Claudio Abbado, Pierre Boulez to Daniele Gatti, Daniel Harding and Jonathan Nott.

Despite the title, a straightforward if oddly gappy account of Mahler's life and works, mostly in French, with high-class performance clips, landscape shots, and expert comments by Henry-Louis de la Grange.