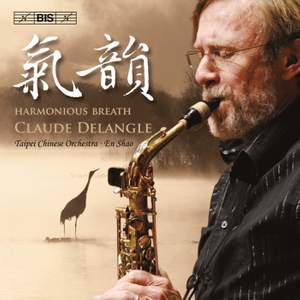 Works for Saxophone and Chinese Orchestra

On his several discs for BIS, the French saxophonist Claude Delangle has shown himself to be a hugely diverse musician: along with his recordings of core repertoire, he has recorded some of the earliest saxophone works, composed for the instrument’s inventor Adolphe Sax, as well as uncompromisingly contemporary music by composers such as Scelsi, Berio and Hosokawa.

Here, Delangle visits Taiwan, and with the Taipei Chinese Orchestra playing traditional Chinese instruments, performs works including two saxophone concertos by the prominent Taiwanese composer Yiu-Kwong Chung (b.1956), as well as Open Secret, a work composed for Claude Delangle and the orchestra by the young composer Leilei Tian (b. 1971).

This disc also includes arrangements of two traditional Chinese pieces, which in Claude Delangle’s own words formed a musical entryway for him ‘into the great tradition of Chinese music’.