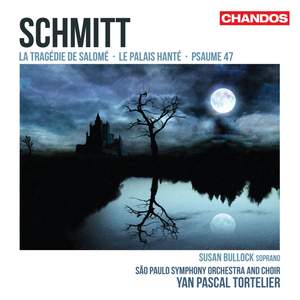 Tortelier is...supple and caressing, emphasising the score's Gallic progeniture. Going from the lurid sex and violence of Salome to Schmitt's setting of Psalm 47 should be a major wrench stylistically,... — BBC Music Magazine, August 2011, 5 out of 5 stars More…

Florent Schmitt was well known as a critic and composer during his lifetime, but his compositions fell into neglect after his death. Difficult to pigeonhole, he has been called everything from conservative to neo-romantic to revolutionary, and Dutilleux wrote of him that he ‘gave back to the French school certain notions of grandeur’.

The three works on this CD are all remarkable in their own ways – for their rhythmic exuberance, their rich and varied orchestration, their imaginative use of traditional harmonies, and in the case of Le Palais hanté and La Tragédie de Salomé for their exploration of the dark side of humanity.

Schmitt’s setting of Psaume 47 for soprano, chorus, organ, and orchestra was premiered in 1906. This was to be the only choral score on an epic scale by a French composer until Honegger wrote Le Roi David twenty years later.

Several other important compositions followed, the symphonic poem La Tragédie de Salomé being perhaps Schmitt’s best-known work today. The original ballet, scored for a modest-sized orchestra, was performed at the Théâtre des Arts in Paris, but Schmitt later shortened the work while substantially expanding the orchestration.

Le Palais hanté is based on a poem from The Fall of the House of Usher by Edgar Allan Poe. A recurring message in the writings by Poe is that all good things in life are transitory and – however good and stable things may seem – evil lurks just around the corner. In this work, Schmitt marries the sense of doom inherent in the poem – evident from the very first phrase – with a style that is reminiscent of Liszt.

On this SACD, the São Paulo Symphony Orchestra and Choir are conducted by Yan Pascal Tortelier, an exclusive Chandos artist who over the years has built up an impressive and highly regarded discography with the label.

Tortelier is...supple and caressing, emphasising the score's Gallic progeniture. Going from the lurid sex and violence of Salome to Schmitt's setting of Psalm 47 should be a major wrench stylistically, but isn't: Tortelier again excels in the untrammelled sensuality of the middle section, where solo violin and soprano exchange indecently lavish rhapsodies...This is a superb CD, and an ideal introduction to the perilously seductive sound-world of this composer.

under Yan Pascal Tortelier, the Brazilian orchestra is first rate: the strings are rich, the brass cobweb-blastingly astringent, the percussion galloping. Susan Bullock and the SPSO choir make a fine contribution to the psalm.

Tortelier relishes the rich Wagnerian colours and the fluidity of harmony and directs a radiant account of Psalm 47, with the chorus's singing fully matching the music's jubilation.

this new SACD reminds us that La Tragédie de Salomé and Psalm 47 are surely masterpieces of their type...Tortelier has an exceptionl ability to control long crescendos...He's also blessed wioth Susan Bullock, a magnificent soprano who can navigate the extremes of the part without losing her calm or her tonal luxuriousness.

Bullock has plenty of steel to penetrate the thrilling choral sound captured by Chandos’s superb recording — warn the neighbours before you put it on — and Tortelier plays this rarely heard music for all it is worth...A sumptuous exploration of the essence of Schmitt.

It's fluently done, and a perfect piece for a musical quiz – the composer would be hard to identify other than as French.

The music inhabits the same sound world as Schmitt’s contemporaries Debussy and Ravel, though without their harmonic adventurousness, and the São Paulo forces bring out all its lushness.

it has taken a Chandos SACD recording to render what must be nigh-definitive readings. This is not music for casual listening, but music lovers prepared to give themselves over to an experience that will leave them somewhat drained need not hesitate. However, for the full experience, you will need five speakers and a sub-woofer.