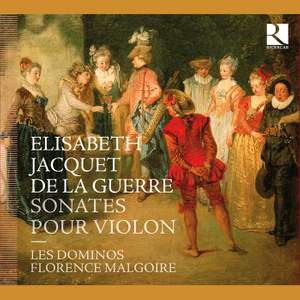 It was Jean-Jacques Rousseau in his Dictionnaire de Musique who quoted the philosopher Fontenelle’s famous outburst ‘Sonata, what do you want from me?’. The Italian sonata was the fashion in France at that time and composers had abandoned the character pieces and the works in dance forms that had typified French music until then. Couperin, a proud champion of French music who was nonetheless attracted by the charms of Italian music, had tried to reconcile the musical tastes of the two nations by giving illustrative titles to the various movements of his sonatas.

This new series of recordings from Ricercar will explore the history of the sonata in France at the beginning of the 18th century. The structural freedom and the undeniable sense of drama implicit in the Sonatas by Elisabeth Jacquet de La Guerre provide an excellent delineation of our theme. Louis XIV was not wrong about this music: ‘‘Dinner being over, His Majesty spoke to Mlle de la Guerre in a most gracious manner; after having praised her sonatas extensively, he said to her that they could not be compared to any other such works. Mlle de la Guerre could not have received higher praise, for these words revealed that the King had not only found her music to be most fine, but also to be original — a quality that today is extremely rare.’ ( Le Mercure galant, 1707) This recording also marks the debut of Florence Malgoire and her ensemble Les Dominos on the Ricercar label.