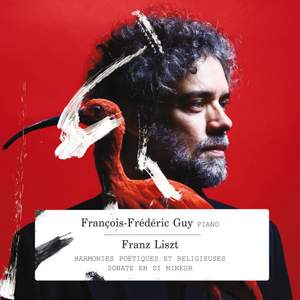 Guy's technique can match anybody's for firepower. He also offers moments of genuine revelation. I hadn't realised quite how thrilling an introduction to the cycle the opening Invocation can... — BBC Music Magazine, September 2011, 4 out of 5 stars More…

Zig-Zag Territoires begins its collaboration with the pianist François-Frédéric Guy, ‘an exceptional artist’ (Le Figaro, 2008), with two prestigious projects: the complete Beethoven piano sonatas recorded live at the Arsenal in Metz between December 2010 and December 2012, and a Liszt double album featuring two of that composer’s key works: the Sonata in B minor and the complete cycle of Harmonies poétiques et religieuses.

Zig-Zag Territoires wishes to accompany the development of this artist who first attracted attention with a ‘titanic “Hammerklavier” . . . [in which] we are in heaven’ (Le Monde, 1998), and has since marked his territory by ‘tackling the Everests of the repertoire’ (Libération, 2004): Brahms’s Second Concerto with the London Philharmonic Orchestra under Paavo Berglund (Naïve, 2004), followed by the complete Beethoven piano concertos with Philippe Jordan and the Orchestre Philharmonique de Radio France (Naïve, 2008-10).

François-Frédéric Guy regularly performs the cycle of Harmonies poétiques et religieuses in concert, either as a solo recital or alongside the actress Marie-Christine Barrault who recites the Lamartine poems that inspired the composer.

We decided to record these masterpieces in the studio of La Chaux-de-Fonds (Switzerland), renowned for its exceptional acoustics. With the aim of reproducing the spontaneity of concert conditions, François-Frédéric Guy recorded the entire double album in just four days.

‘Recording the Harmonies Poétiques et religieuses represents a important moment in my artistic and discographic career, since Liszt is one of my favourite composers. It is certainly one of the finest cycles in the piano literature, made up of musical settings of the poems of Lamartine that combine grandiose inspiration and intimate meditation. As for the Sonata in B minor, in my view it constitutes the peak of the composer’s output and is still the only piano work that can follow on from Beethoven’s “Hammerklavier”.’ François-Frédéric Guy

Guy's technique can match anybody's for firepower. He also offers moments of genuine revelation. I hadn't realised quite how thrilling an introduction to the cycle the opening Invocation can be; and while the Andante lagrimoso can sometimes seem a less than remarkable statement by Lisztian standards, Guy's searching way makes it more memorable.

his Harmonies poetiques et religieuses achieves a magnificent sense of how Liszt extended the piano's and indeed music's poetic possibilities into a wholly new realm and dimension. He is enthralling in the "Invocation", most opulent of curtain-raisers, mystical in the "Ave Maria"...this is a true act of musical devotion