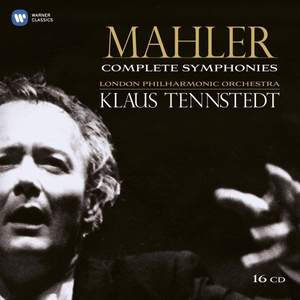 Tennstedt's Mahler is of the old school; no "Mahler lite" here...His tempi are indeed often slow but by no means necessarily the slowest in comparison with other successful versions and his sense... — MusicWeb International, August 2011 More…

Klaus Tennstedt was born on 6th June 1926 in Merseburg a small Saxon town between Leipzig and Halle. He was a highly talented violinist and followed his father into the Halle Opera orchestra of which he was made leader whilst still in his teens. He also studied in Dresden and as a member of the fire brigade was detailed to dig bodies out of the rubble after the city was blitzed in 1944. A solo career awaited him but a growth on his left hand brutally cut this short at the age of 19 but, after months of depression, he emerged as the opera’s repetiteur. He naturally watched conductors but was not given an opportunity to try until, at an hour’s notice, he took over a performance.

The experience galvanised him to seek this path as a career but his refusal to join the Communist Party ensured that he was limited to poorer opera houses. In his mid-30’s he went to Berlin seeking a chance to defect, but it was not until March 1971, aged 44, when he was allowed to conduct in Gothenburg. The freedom in the West did not give him many major opportunities either; however the offer of the musical directorship of the Kiel Opera was offered and accepted. A manager from the Toronto Symphony Orchestra heard him and duly invited him to Canada.

A chance stand-in engagement in Boston conducting Bruckner’s Eighth Symphony was met with such ecstatic reviews and audience enthusiasm that he was offered dates with the finest orchestras. He was 48 and after his years spent in provincial theatres this sudden fame and fortune must have been overwhelming for such a sensitive man. Luckily for the musical world he then discovered the composer whose music would make his career; a composer who like himself, suffered from self-doubt: Gustav Mahler. He had had no chance to hear any of his music during his student years as it had been banned by the Nazis.

He was uniquely able to identify with Mahler’s life-and-death struggles and the shear intensity that he brought to the performances made them unforgettable. It could be argued that his concerts provided the stimulus for the major record companies to change their policy of recording exclusively in the studio to one of taping live and relying on careful editing to remove any blemishes.

His repertoire was far from limited to Mahler – the romantics from Beethoven to Richard Strauss all received thoroughly detailed and considered readings.

He was popular too with soloists – his experience as a repetiteur and soloist gave him an unique understanding of what they needed in an accompanist.

Everything seemed to be set fair but the angst that he would, like Mahler, die prematurely proved correct for in his 60th year throat cancer struck. Initially he was able to continue conducting if at a reduced pace, but gradually the disease took its awful toll. His final engagement was in Oxford where he rehearsed the University orchestra before receiving an honorary doctorate in June 1994.

It is highly appropriate that Klaus Tennstedt’s career should be reassessed in 2011 as it is the year that not only marks the centenary of Mahler’s death but also what would have been the year of Tennstedt’s 85th birthday.

Tennstedt's Mahler is of the old school; no "Mahler lite" here...His tempi are indeed often slow but by no means necessarily the slowest in comparison with other successful versions and his sense of the music's architecture invariably means that he eschews any tendency to drag...a wonderful testament to the devotion to Mahler of a conductor who came late to the composer but brought to his music the mature fruits of his own mental and bodily suffering.