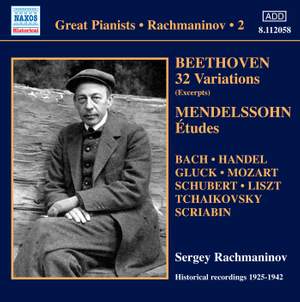 Rachmaninov's unrivalled pianism delights in a stunning recital that opens with a spellbinding Bach Sarabande. — BBC Music Magazine, December 2011, 5 out of 5 stars

Rachmaninov’s reputation as a composer has waxed and waned over the years, but as a pianist he remains renowned, not least among other pianists, as one of the greatest. His perfect technique, utter clarity and discipline, and supreme musicianship shine undiminished through even his earliest recordings.

Ever the perfectionist, he would often set down multiple takes of even the shortest pieces (no fewer than 22 of Mendelssohn’s Spinning Song, for instance), carefully choosing only the best for release. His account of a selection of Beethoven’s 32 Variations in C minor WoO 80 effortlessly negotiates every nuance, from utmost delicacy to thunderous virtuosity, while his affinity for the Romantics is self-evident.

Rachmaninov's unrivalled pianism delights in a stunning recital that opens with a spellbinding Bach Sarabande.