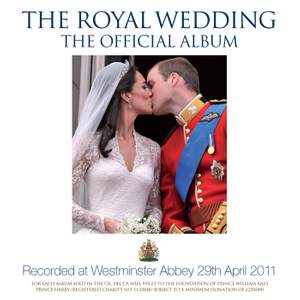 The Royal Wedding – The Official Album

trad.: The Arrival Of The Queen And The Duke Of Edinburgh - Fanfare

Parry: The Procession Of The Queen - March from The Birds

Parry: The Procession Of The Bride (The Introit) - I Was Glad

The Welcome And Introduction

Rutter: The Anthem - This Is The Day Which The Lord Hath Made

Music After The Service - Toccata From Symphonie V

'The Royal Wedding - The Official Album' is a unique memento of the most significant and anticipated event in Britain's modern history. Featuring every aspect of this incredible occasion, the album will include the music - old and new - the readings and blessings, and of course the exchange of vows between Prince William and Catherine Middleton - as they happen in the historic Abbey on the day itself. It will be the only official, sanctioned recording of The Royal Wedding. The music is provided by The Choir of Westminster Abbey, the London Chamber Orchestra, the State Trumpeters and the Trumpeters of the Central Band of the RAF.