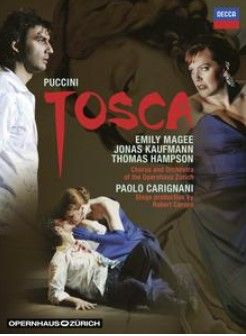 Chorus and Orchestra of the Opernhaus Zürich, Paolo Carignani

Part of the reason why it works so well is that the three principals are such good actors, turning in dramatic performances that are full of subtle details. Emily Magee's Tosca is sympathetic... — Gramophone Magazine, December 2014 More… 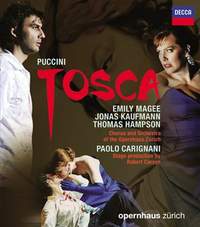 This is Jonas Kaufmann’s Tosca debut on DVD. It features him in a key role that he is performing to great critical acclaim all over the world. Mostly Opera Magazine reviewed that he is “the undisputed leading Cavaradossi of our day” and about Emily Magee, his Tosca, “sings the part better than anyone I can imagine today”.

The passion and tragedy of Tosca are dramatically highlighted in Robert Carsen’s “theatre-within-theatre” staging of Puccini’s great opera. Emily Magee plays opposite the charismatic Jonas Kaufmann and debonair Thomas Hampson (Scarpia); together they bring a rare intensity to this famous tale of love and revenge from beyond the grave.

In the production, filmed in 2009, Paolo Carignani conducts the Orchestra of the Opernhaus Zürich.

The star cast and great reviews of the performances make this product highly desirable for any opera lover.

Part of the reason why it works so well is that the three principals are such good actors, turning in dramatic performances that are full of subtle details. Emily Magee's Tosca is sympathetic and proud, cunning and thoughtful...Hampson brings sly understatement and intelligence to the role...Kaufmann is a terrific Cavaradossi...for a new take on an old warhorse, this release has much to recommend it.

Jonas Kaufmann is so eloquent that the deficiencies flying around him on stage vanish as soon as he opens his mouth...A modest word of praise, too, for Giuseppe Scorsin as the Sacristan, characterfully bumbling round Anthony Ward’s annoying sets in his pullover with holes...But the music that matters comes from Kaufmann’s throat, mellifluously convincing no matter what the production’s ills.

Robert Carsen’s production of Tosca for Zurich has one good idea and then gets rather stuck within its own self-imposed parameters. ‘Tosca as diva’ is the be-all and end-all...That’s fine until the drama becomes real or intimate, at which point there’s the basic question of what is fantasy and what’s not.

Vocally, the honours here go to Jonas Kaufmann whose Cavaradossi is wonderfully sung...On this sort of form, there isn’t a tenor to touch him in this repertoire at the moment. Emily Magee has a Wagnerian-sized soprano capable of circumnavigating the role of Tosca with ease, although hers is not a particularly distinctive voice...Thomas Hampson makes for a suave and slimy Baron Scarpia