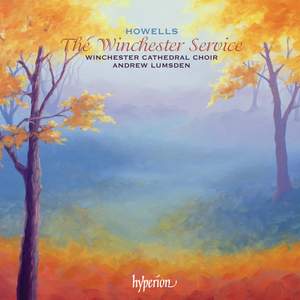 The performances of the Winchester Cathedral Choir are so good that you hardly register the need to 'assess' them - exactly as it should be in devotional music. That's a huge tribute to the state... — BBC Music Magazine, September 2011, 5 out of 5 stars More…

Howells: Thee will I love

Howells: A Flourish for a Bidding

Howells: The fear of the Lord

Hyperion’s previous recordings with Winchester Cathedral Choir are among the jewels in its choral collection. Now the label begins a new relationship with this ancient foundation and its latest director of music, Andrew Lumsden. Their new disc features a composer who was at the centre of the English twentieth-century choral tradition.

Herbert Howells’ is a unique and distinctive voice in church music and it is his lyrical anthem Like as the Hart and his compositions of the 1940s and 50s for which he is most known and celebrated. However, his late works are equal in beauty and intensity and it is these that are featured on this superb recording. They are often over-looked as a result of their difficulty but Winchester Cathedral Choir reveal them as unjustly neglected gems.

The Winchester Service, written in 1969, has its roots in plainchant and demonstrates the composer’s chromatic sophistication and the incredible depth of his harmonic palette. The choir display a clear affinity with the composer. They perform with sensitivity and precision and their glorious sound is quintessentially English.

The performances of the Winchester Cathedral Choir are so good that you hardly register the need to 'assess' them - exactly as it should be in devotional music. That's a huge tribute to the state of singing at the cathedral, and to Andrew Lumsden, whoe directs it. A marvellous CD, beautifully planned and executed.

The line-up of boy choristers can compete in terms of strength and incision with the best among their cathedral and collegiate peers. Their tonal richness and compelling collective conviction, outstanding in Come, my Soul and Howells's virtuosic Te Deum, bear witness to a choral institution clearly on the rise...Winchester's assistant director of music, Simon Bell, also commands attention with bold, imaginatively voiced organ playing.

What this CD underlines is that, for all their trickiness of execution, with a harmonic range from the archaic to the chromatic, these pieces are vintage Howells. And far from constituting “old man’s music”, works like Antiphon and Exultate Deo express a joyful vitality. The performances, conducted by Andrew Lumsden with organist Simon Bell, thrive on the radiant Winchester Cathedral acoustic.

This is one of the most beautiful CDs of choral music you're likely to hear...the magnificent Winchester Cathedral Choir give performances of near-perfection that sound completely effortless...There's an ideal blend and balance between upper and lower voices, and the trebles have a warm, glowing brightness...Simon Bell provides impeccable accompaniments with intimate colouring. He also displays tremendous virtuosity in the two organ solos

The Winchester Cathedral Choir is first-rate: intelligently responsive to texts, phrasing naturally shaped and with near flawless ensemble and dynamic control, all admirably demonstrated throughout...These are uniformly excellent performances and the recording quality is detailed yet superbly spacious.

this recording by a radiant Winchester Cathedral Choir urges a thorough reappraisal [of the lesser-known works]. The long, fluid lines, startling cadences and massive chords which are so unique to Howells are all here in "their" service, and they delight in some smaller works, particularly "Thee Will I Love" from 1970, with Simon Bell adding some delicious organ solos.