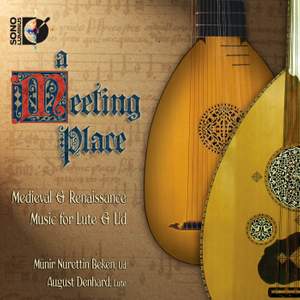 Beken is an accomplished composer in his own right and the whole recording has an involving, quasi-improvisatory feel, even down to the freedom with which the two players co-ordinate with each... — International Record Review, July/August 2011 More…

Separated by cultures, continents, and centuries of parallel development, the Turkish ud and Western European lute speak different languages today, yet they hearken back to a common origin. With the Sono Luminus release of A Meeting Place: Medieval & Renaissance Music for Lute & Ud, Münir Nurettin Beken and August Denhard explore the improvisatory richness of a performance tradition that their instruments may have shared in the Middle Ages and Renaissance.

Throughout its long history, the Turkish ud has been played primarily with a plectrum, a technique perfectly suited to the melodically colorful and sometimes rhythmically intense music of Turkey, the Arab countries, and Northern Africa. Moorish musicians brought the instrument to Spain, and Europeans may also have encountered it on the Crusades of the 13th century. As the ud developed into its European counterpart, the lute, it retained the plectrum, concentrating on single melodic lines. But lute players began to set the plectrum aside as later medieval music developed in polyphonic complexity. Fingers striking strings simultaneously could more easily imitate the two-, three-, and four-part textures of the emerging vocal style. For this recording, plectrum and finger techniques are used on both instruments as the artists explore the many roles that plucked instruments may have played in the medieval and renaissance periods.

Ud virtuoso and composer Münir Nurettin Beken began his musical life in 1975 at the age of eleven, studying at the State Conservatory of Istanbul under the famous pedagogue Mutlu Torun, author of an extensive work on the ud method. In 1998, Mr. Beken earned a Ph.D. in ethnomusicology from the University of Maryland. He has studied composition with Cemal Resit Rey, Yalçın Tura, and Stuart Smith and participated in composition workshops with such luminaries as George Crumb, Lukas Foss, Philip Glass, Roger Reynolds, Steve Reich, and Charles Wuorinen.

As a performer on lute, theorbo and baroque guitar, August Denhard has appeared with Seattle Baroque Orchestra, the Concord Ensemble, Chicago Music of the Baroque, the Indianapolis Baroque Orchestra, Camarata Pacifica Baroque, and many other ensembles specializing in early music. Mr. Denhard has given numerous solo recitals and is in demand as an accompanist of 17th century vocal music. He performs regularly in a lute song duo with tenor Eric Mentzel and with Baroque Northwest.

Beken is an accomplished composer in his own right and the whole recording has an involving, quasi-improvisatory feel, even down to the freedom with which the two players co-ordinate with each other...This is a meeting place which is going to get crowded when the word gets round.