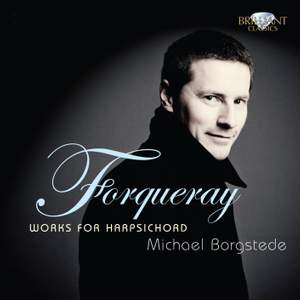 Borgstede uses a double-manual French harpsichord modelled after Pascal Taskin (1723-93). Its tuning is in accord with Rameau's 'Temperament ordinaire', which seems to befit the instrument's... — Gramophone Magazine, November 2011 More…

Forqueray, A: Harpsichord Suite No. 4 in G Minor

Forqueray, A: Harpsichord Suite No. 2 in G Major

Forqueray, A: Harpsichord Suite No. 1 in D Minor

Forqueray, A: Harpsichord Suite No. 3 in D Major

Forqueray, A: Harpsichord Suite No. 5 in C Minor

Father (Antoine 1679-1745) and son Jean- Baptiste (1699-1782) Forqueray had the sort of relationship that would not be out of place in a present day TV soap. They loathed each other. The father’s jealousy of his son’s great musical talent (Antoine was a famous virtuoso viol player) led him to have Jean-Baptiste jailed in trumped up charges of womanising and theft. And he was banished from the kingdom for 10 years on pain of death. A petition from influential friends and his pupils got him released and pardoned in 1726.

In 1747 Jean-Baptiste by then the outstanding viol player of his generation published a collection ‘Pieces de viole composees par M. Forqueray le pere’ although the content attributable to his father is probably negligable. At the same time he published a set of transcriptions for keyboard of the same works - a shrewd business decision. The transcriptions are extraordinary with highly virtuosic writing, including the crossing of hands in La Clement in the 4th Suite. One reason for the lavishness of the transcription could be that Jean-Baptiste had recently married the very attractive Marie-Rose Dubois who also happened to be one of the most brilliant harpsichordists the time. One can only wonder what part she played in the transcriptions.

Borgstede uses a double-manual French harpsichord modelled after Pascal Taskin (1723-93). Its tuning is in accord with Rameau's 'Temperament ordinaire', which seems to befit the instrument's full-bodied yet mellow resonance...Borgstede's overlapping legato technique draws out the music's lyricism and harmonic tension