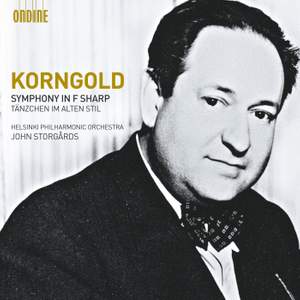 Dance in the Old Style...is a charming antidote to what has gone before...although there are no characteristic grand romantic gestures, the orchestra play this dance with an affection and lightness... — Gramophone Magazine, September 2011 More…

Combining a popular masterwork with a rare discovery piece, this Erich Korngold album couples the monumental Symphony in F sharp with the world première of the 8-minute Tänzchen im alten Stil.

Erich W. Korngold (1897–1957) was as an Austro-Hungarian composer with Jewish roots who became a naturalized U.S. citizen in 1943; his success as a Hollywood film composer culminated in two Academy Awards.

The 50-minute Symphony in F sharp major, Op. 40, is Korngold’s only symphony, written in a late Romantic style. Composed between 1947–1952, it is dedicated to the memory of Franklin D. Roosevelt (died 1945). In 1959, Dimitri Mitropoulos wrote: “All my life I have searched for the perfect modern work. In this symphony I have found it.”

In 1919, 22-year-old Korngold wrote Tänzchen im alten Stil during his military service in World War I. The world première performance of this rediscovered work took place in Jyväskylä, Finland, in 2007 under John Storgårds, who on this CD conducts the Helsinki Philharmonic Orchestra.

Dance in the Old Style...is a charming antidote to what has gone before...although there are no characteristic grand romantic gestures, the orchestra play this dance with an affection and lightness of touch that makes it fresh and appealing.

[Storgårds] keeps control over the work's structure, so his reading emphasizes not just emotion but also logic. The Symphony's progress acquires a new inevitability. The Helsinki Philharmonic responds to this compelling music with virtuosity...Storgårds and the Helsinki Philharmonic create a reasonably Viennese atmosphere, albeit one that (thankfully) is not allowed to become too sickly sweet. Strongly recommended!