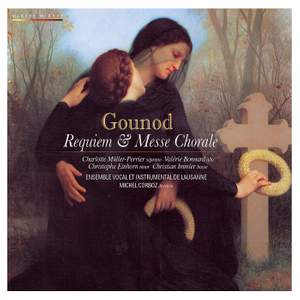 [The Requiem] is a gem of a piece, providing the stylistic link between the earlier Faure setting and successors such as Durufle and Desenclos. The recording (made in a converted granary in the... — Gramophone Magazine, August 2011 More…

Charles Gounod, wrote the Requiem, one of his finest pieces, between 1889 and Palm Sunday 1891, the date he added 'fin' to the foot of his manuscript. It is likely he continued to revise the work until 21 February 1893, the day he sent the score to the Société des Concerts du Conservatoire. According to his friend and student Henri Busser, just three days before his death, Gounod was still rivetted: "...on 15 October 1893, he was still playing passages of "his" Requiem at the piano when he had a fit of apoplexy. Though out of breath, he still tried to continue singing the duet from the Benedictus with his daughter, then carefully put the manuscript away...In the afternoon he was felled by a stroke and lost consciousness. He never emerged from the ensuing coma, and died in the small hours of 18 October..." What is most impressive about this magnificient composition (which, like Fauré's Requiem, ignores the terrors of the final judgement and the horrors of death, this is the path to eternal light which Gounod aspired to follow during his waning years. The "Dies Irae" does not begin with a stormy eruption typical of the romantic but is marked by a haunting, rhythmic, mysterious motive. The most terrifying verses about horror, death and judgement are set to the work's most beautiful passages, serene, celestial, as if the heavens were opening: the "Recordare", sung by a soprano and taken up by the chorus.

[The Requiem] is a gem of a piece, providing the stylistic link between the earlier Faure setting and successors such as Durufle and Desenclos. The recording (made in a converted granary in the Limousin) is superb and this benchmark performance exemplary. Do try.

The Requiem supports the prevalent view that religion and sensuousness were closely linked in Gounod's psyche, though it's also music of heart-on-sleeve directness...conductor Michel Corboz rejects the original orchestration in favour of a version for harp, string quintet and organ...Both works sound ravishing as sung by the Ensemble Vocal Lausanne. There's beautiful solo work in the Requiem, too, above all from tenor Christophe Einhorn.

In its emphasis on a consoling vision of death it looks forward to Fauré’s rather more famous requiem. Corboz and the Lausanne forces sweetly convey both the serenity and the subdued anguish underlying it.