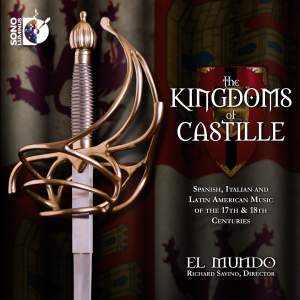 El Mundo: The Kingdoms of Castille

Orejon y Aparicio: A del Día, Our Lady of Copacabana

Travel across Europe andeven to the New World as we follow the spread of the music of spain in the second release from early music ensemble El Mundo, directed by world renowned guitarist Richard Savino. An adventure of sound awaits as the Castilian influence reaches throughout it’s neighboring countries andacross the Atlantic, bringing with it a musical zest that helped mold music as we know it.

Spanish arts, and music in particular, have evolved through the interaction and blend of the many unique cultures from within its borders, the most prominent of which are Christian, Arabic, Jewish, and Romani (Gitano/Gypsy). By the 17th century additional contributions from indigenous New World influences helped create a fertile environment for an emerging nationalist style in the arts, one that was uniquely Hispanic and still exists to this day.

From its position of political prominence 17th-century Spain spread its might, as well as rich culture heritage, to various colonial outposts throughout the globe. Musicians migrated to distant colonial centers to service Catholic missions and cathedrals, as well as the courts of the Spanish Vice Royalty. In the process the Spanish musical vernacular was disseminated to, and often absorbed by these local cultures. This recording presents a selection of works demonstrating the rich musical repertoire and close cultural connections between Spain, and the most important of these, those located in Latin America and Italy.

Richard Savino’s performances and recordings have been praised by critics throughout the world. In addition to receiving a Diapason d’Or from Compact (Paris) and a 10 du Rèpertoire (Paris), the latter has also placed his Boccherini recordings in their “Great Discoveries” category which they deem as essential to any classical music collection. His over thirty five recordings have garnered international acclaim, such as the romantic guitar music of Johann Kaspar Mertz, virtuoso sonatas by Paganini and Giuliani with violinist Monica Huggett, and many, many more.

His previous recording with Sono Luminus, El Mundo’s recording of Sebastian Duron’s zarzuela Salir el Amor del Mundo (1696), was released in March 2010. In addition to his recordings, Mr. Savino performs regularly with some of the world’s most important musicians and organizations including the Houston Grand Opera, New York Collegium and many others. Presently he is director of the ensemble El Mundo and in 1995 and 2005 he was Visiting Artistic Director of the prestigious Aston Magna Academy and Music Festival on multiple occasions.