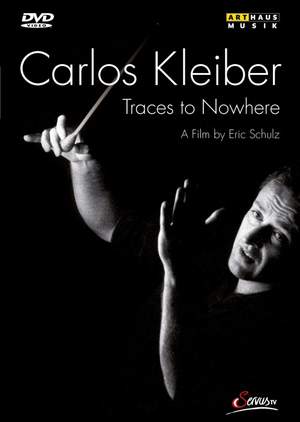 A Film by Eric Schulz

Traces has Veronika Kleiber, the conductor's sister - a shrewd, loving and highly articulate woman who has many stories and comments that help to bring Kleiber to vibrant life. So, too, does... — BBC Music Magazine, July 2011, 4 out of 5 stars More…

On the 11th July 2004 Carlos Kleiber got into his car and drove from Munich, via the Alps, to his holiday home in the remote Slovenian village of Konjsica. There he wrote a final letter to a friend in which he bid farewell to the world. A short time later the conductor, increasingly plagued by illness and suffering, was found dead.

The documentary “Traces to Nowhere” represents the first film dedicated to the enigmatic personality of the conductor. The film follows in the traces of Kleiber’s final journey and, by means of the recollections of friends and other companions – including the first and only interview with his sister Veronika – portrays a man as renowned for his difficult personality as his brilliant work.

“I never wanted to talk about what he did and always said my brother didn‘t give interviews, so I wouldn‘t say anything myself,“ reveals Veronika Kleiber. And she explains the background to this silence. “As far as possible you should leave no traces behind in life. That‘s an old Chinese saying that my brother identified with.“ She adds goodhumouredly: “And now here we are, acting as traces. That‘s all your fault!“ Veronika Kleiber, the sister of Carlos Kleiber

“What he left us is that tremendous emptiness of losing a friend, and a genius.” Plácido Domingo

“Kleiber was a living legend. His incredible reputation preceded him wherever he went.” Otto Schenk

Traces has Veronika Kleiber, the conductor's sister - a shrewd, loving and highly articulate woman who has many stories and comments that help to bring Kleiber to vibrant life. So, too, does Brigitte Fassbaender, who worked very often with the conductor as Octavian...Traces is worth watching, and several times, for her alone.