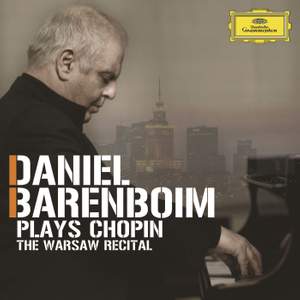 He makes a magisterial start with the great Fantasie in F minor, viewing it from a German Romantic point of view — BBC Music Magazine, July 2011, More…

Two releases on Deutsche Grammophon will be devoted to Chopin: a solo recital recorded in Warsaw, with deeply-felt Waltzes, a Polonaise, a Fantasia, a Nocturne and the B flat minor Sonata, as well as Chopin’s two piano concertos, accompanied by the Staatskapelle Berlin under Andris Nelsons, captured live at the Ruhr Piano Festival in July 2010.

He makes a magisterial start with the great Fantasie in F minor, viewing it from a German Romantic point of view

The walzes are pointed up with gorgeously varied articulations and well-contoured bass-lines that thankfully draw more attention to the composer than the pianist...the engineering's resonant ambience communicates a palpable sense of occasion and flatters Barenboim's huge, colourful sonority.

There are, of course, things to admire: the almost Brahmsian shaping of the Op 49 Fantasia, which is revealed again as one of Chopin's most remarkable formal structures; the crystalline beauty of the line spun through both the Berceuse and the Barcarolle; the inwardness of the D flat major Nocturne, carefully nuanced yet crisply defined.