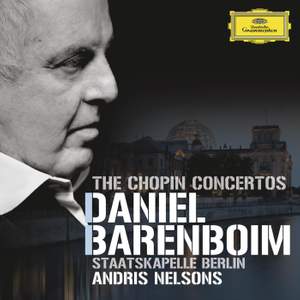 Always authoritative, Barenboim is by turns graceful and gutsy, an especially good combination in the E minor Concerto - and his orchestra, the Berlin Staatskapelle (here under Andris Nelsons),... — BBC Music Magazine, July 2011, 5 out of 5 stars More…

Two releases on Deutsche Grammophon will be devoted to Chopin: a solo recital recorded in Warsaw, with deeply-felt Waltzes, a Polonaise, a Fantasia, a Nocturne and the B flat minor Sonata, as well as Chopins two Concertos, accompanied by the Berlin Staatskapelle under Andris Nelsons, captured live at the Ruhr Piano Festival in July 2010.

Always authoritative, Barenboim is by turns graceful and gutsy, an especially good combination in the E minor Concerto - and his orchestra, the Berlin Staatskapelle (here under Andris Nelsons), responds warmly, with wonderful woodwind solos. In the strongly accented, dancing finales to both concertos, Barenboim leads the way with playing of suppleness and wit.

Unsurprisingly, even the piano entry at the beginning of the Chopin concerto disc is striking. The languid orchestral tutti that opens the work has its calmness well and truly shattered by the clang of Barenboim’s fingers. He shows equal lightness of touch later on, though...[The Second Concerto] is just as joyous to hear under the maestro’s control. it is a singular treat to hear Barenboim have at these concerti for the first time.

His amplitude of phrasing and dynamics, matched by the orchestra's, is in place as a response to the pageantry and flow of events that is unceasingly generous. You could say that the playing is big, but what is predominant is its authority...it's his qualities of insight and distinction in the musical control of these beautiful pieces that carry the day, and in that regard it seems to me that they have rarely been served so well.

The recording is notable for the clarity with which both the piano and orchestra are captured: there's far more orchestral detail to be heard on this disc than in many rival versions, and it's great to have it, especially as Nelsons conducts with such sensitivity

these are performances on a grand scale, yet wonderfully fluent, charged with an infectious energy and effortless poise. They are perhaps remarkable most of all for the rapport between Barenboim and the Berlin Staatskapelle...All too often in other performances of these concertos, the orchestra is kept firmly in its accompanying place; here Nelsons repeatedly reveals how much beauty and detail there is to be found in the orchestral writing, too.