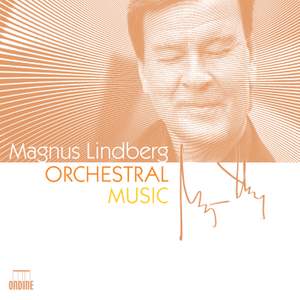 The prodigious Finnish composer (b1958) is among the doughtiest wielders of the large orchestra at work today. His style is instantly recognisable — furiously scurrying surfaces, sounding at... — Sunday Times, 10th April 2011, 3 out of 5 stars More…

Magnus Lindberg is one of the most successful living composers. Since 2009, he has been The New York Philharmonic’s Composer-in-Residence.

This anthology of works, written in 1982–2005, documents the evolution of Lindberg’s output and style since his earliest carrier until recent years.

The featured works have helped to cement Lindberg’s international position at the forefront of orchestral composition, with several important awards along the way (Prix Italia 1986, the UNESCO Rostrum of Composers 1986, and the Nordic Music Prize 1988 for Kraft; Royal Philharmonic Society Prize 1992 and the Wihuri Sibelius Prize 2003).

These recordings feature the Finnish Toimii Ensemble (including Magnus Lindberg on piano), Finnish RSO, the Avanti! Chamber Orchestra and the Bavarian RSO, as well as conductors Sakari Oramo, Esa-Pekka Salonen and Jukka-Pekka Saraste.

“Magnus Lindberg is one of the most important post-1945 orchestral composers. He has managed to create a unique synthesis: a distinct, personal, approachable language combined with orchestral virtuosity in the spirit of Strauss, Ravel and Stravinsky.” Esa-Pekka Salonen

The prodigious Finnish composer (b1958) is among the doughtiest wielders of the large orchestra at work today. His style is instantly recognisable — furiously scurrying surfaces, sounding at once felicitous and computer-controlled, underpinned by slow, rumbling, portentous harmonic changes...This impressive four-disc compilation of some (not all) of his orchestral essays allows one readily to trace his development.

This collection of works written between 1982–2005 is a representative (and striking) sampler of his compositional skill.