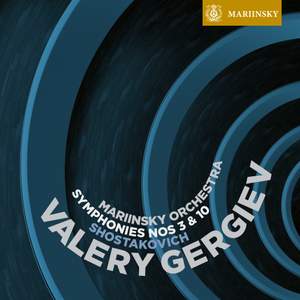 He treats [the Third] like a film score, making the most of graphically illustrative passages...and inspiring the massed ranks of the Mariinsky Chorus to sing their hearts out in the stirring... — BBC Music Magazine, June 2011, 4 out of 5 stars/1 out of 5 stars More…

For the the third title in his Shostakovich symphony cycle, Valery Gergiev again couples two works from different stages in the composer’s career. Although Shostakovich’s symphonies are usually highly programmatic, the Third and Tenth Symphonies are amongst his most enigmatic works.

Symphony No. 3 was first performed in January 1930, its final movement setting a text by Semyon Isaakovich Kirsanov praising May Day and the revolution. Shostakovich stated that the work “expresses the spirit of peaceful reconstruction” and yet much of the music is dark and sombre in tone.

The Tenth Symphony is one of his most popular and frequently heard works. It was first performed in December 1953 following the death of Stalin, although Shostakovich had been working on much of the material incorporated in the symphony for many years. The great Russian soprano Galina Vishnevskaya claimed that the symphony was “a composer’s testament of misery, forever damning a tyrant.” Previous releases in Gergiev’s Shostakovich cycle include Symphonies Nos 2 & 11 and Symphonies Nos 1 & 15, the latter of which was nominated for two Grammy Awards. The Mariinsky label will release its second recording with pianist Denis Matsuev during May 2011 featuring Shostakovich’s piano concertos.

He treats [the Third] like a film score, making the most of graphically illustrative passages...and inspiring the massed ranks of the Mariinsky Chorus to sing their hearts out in the stirring choral finale...there are some extremely impressive things to discover in Gergiev's interpretation [of the Tenth], particularly in the second half of the work...There's some wonderfully expressive woodwind playing, too

Gergiev and his orchestra charge through the Third Symphony's roistering torrent of ideas, so that the music seems to hold itself together by adrenalin alone: the result, like the work itself, is brash and brilliant...the one that matters is the Tenth Symphony: Gergiev's superb, tight-reined interpretation holds its own with the best.

In the Third Symphony, the overriding priority is a sense of enthusiasm - one that has to be driven towards the manic, then shadowed by nightmarish visions, and finally colossally reasserted, one that has to be fuelled from start to finish by unshakeable self-belief. Gergiev and his Mariinsky players have all those qualities at their fingertips...If this is outstanding, the Tenth is even more so.

The Allegretto [of the Tenth] is taken quite swiftly and is the most successful movement, the puppet-like dance quite poker-faced, while the repeated 'Elmira' motif...is sensitively played by the horns...[in the Third] Gergiev favour[s] sprightly tempos, even if these exaggerate the sometimes trite nature of the musical material...The performance is capped by the Mariinsky Theatre Chorus, singing with fervour.

Gergiev's account of the symphony is visceral and uncompromising - just listen to the initial string chords of the second movement.

riveting, pugnacious, and genuinely taut performances...And how wonderful to hear a truly Russian chorus capture the blind utopian optimism of the finale...It is a thrill to sense the contrast of the Third's youthful joy against the pungent maturity of the Tenth. And Gergiev knows exactly how to touch every nerve.

Valery Gergiev conducts his Mariinsky Orchestra – on its LSO-backed house label – in thoughtful accounts of astonishing detail. The playing – and recording quality – in this important Shostakovich cycle is hugely impressive.