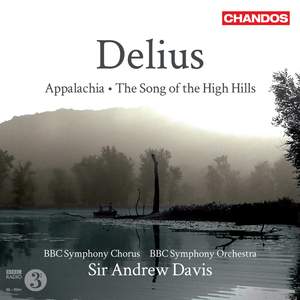 Delius: Appalachia & The Song of the High Hills

Davis combines a sensitive feeling for tempo and shape with superfine detail of phrasing and balancing...The BBC Symphony Orchestra plays for its former chief conductor with precision and spirit,... — BBC Music Magazine, June 2011, 5 out of 5 stars More…

Delius: A Song of the High Hills

Tempo I - Più mosso ma tranquillo - With exultation (not hurried)

This recording presents two comparatively rarely heard but striking works by Frederick Delius, performed by the BBC Symphony Orchestra under Sir Andrew Davis with entirely idiomatic results. Both works are prime examples of Delius’s highly individual and ground-breaking use of voices in predominantly orchestral works.

In Appalachia, the sombre mood reflects the fate that overcame many black slaves along the Mississippi River, who were sold by one cotton planter to another, simply uprooted from loved ones, and transported to a different place – the practice is the origin of the expression ‘being sold down the river’. The inspiration for the work came to Delius when he was working on an orange plantation in Florida as a young man, and from across the water in the distance heard the singing of black farm labourers. Many year later, Delius recollected: ‘they showed a truly wonderful sense of musicianship and harmonic resource in which they treated a melody, and hearing their singing in such romantic surroundings it was then and there that I first felt the urge to express myself in music.’

Setting an anonymous slave song, Delius expresses the human tragedy that unfolds in it initially through the full chorus in unaccompanied song. The orchestra steals in to reflect on the suffering before the baritone sings and the chorus responds. Rising to its climax, the music suggests hope and human dignity triumphing over adversity; the music of the introduction returns and the vision poignantly fades as the ship with its dispossessed slaves sails downstream and disappears from sight.

The inspiration for The Song of the High Hills was the mountains of Norway, which Delius regarded as his spiritual home. In 1911, he started composing the tone poem in which he sought to capture the impression created by a still summer night in the Norwegian mountains. It was completed the following year, written for large orchestra and chorus which, as in Appalachia, plays an integral part in the work, although the singers here are wordless. To emphasise their role in providing colour to the texture, they were directed to be seated throughout, and to ‘sing on the vowel only which will produce the richest tone possible’.

In the words of Delius, the work ‘expresses the joy and exhilaration one feels in the mountains and also the loneliness and melancholy of the high solitudes and the grandeur of the wide far distances. The human voices represent man in nature; an episode which becomes fainter and then disappears altogether’. Delius considered this not only one of his best works, but one of the works in which he had expressed himself most completely.

[Davis] guides the BBC Symphony Orchestra through two beautifully expressive performances that challenge accusations [that] Delius is boring...Credit must also go to the chorus, which tackles its integral role with great subtlety and skill, from the stirring final song of the first piece to the transcendent, wordless choral work of the second.

With the excellent BBC Symphony Orchestra and Chorus, Davis uncovers original turns of phrase in Appalachia, Delius’s heat-haze of variations inspired by the Mississippi swamps. Here, as in the austere choral-symphonic Song of the High Hills, Davis conjures an authentic Delian atmosphere – and brings joy to the heart.

This is a magnificent, clear-edged recording of two challenging, problematic works, performed here with vibrancy and confidence...Davis's diligent control of this extraordinary material makes for compelling listening.

this new Chandos issue is such that it would be hard, if not impossible, to imagine a more magnificent performance of this masterpiece: Davis's tempos are absolutely ideal and his sense of structure is astonishingly impressive. The orchestral playing is unfailingly beautiful and is infused with the demanding combination of sensitivity, brilliance of technique and vividness of colour the score demands. The singing of the choir (and of the brief solo parts) is faultless.

The BBC forces and Andrew Davis conjure exactly the rich transcendence Delius would have enjoyed. The Song of the High Hills, suggested by a visit to the mountains of Norway, is performed with equal lustre.

Both works, in their different ways, conjure up an evocative atmosphere, harnessing a mastery of orchestral and wordless vocal colour that Andrew Davis and his BBC forces translate into musical pictures, rich in texture and poignant in emotion.