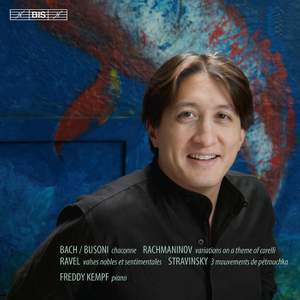 this is a colourful and enjoyable account [of Petrushka], well-characterised and full of dynamic contrast...fans of Kempf need have no qualms about acquiring this release. — BBC Music Magazine, June 2011, 4 out of 5 stars More…

Freddy Kempf has previously recorded ten highly acclaimed solo discs for BIS, of which the latest (BISSACD1820) was described by Gramophone as “a formidable programme formidably played… This is “live” virtuosity with a vengeance, with absolutely no hint of a safety net”.

Rachmaninov’s Corelli Variations is inspired by the theme used by Corelli in his violin sonata La Follia which undergoes a radical pianistic treatment taking it through all the sonic and atmospheric possibilities offered by the instrument.

With his celebrated transcription of Bach’s Chaconne, Ferruccio Busoni had a very different aim, wanting to shed new light on the work without actually changing it.

Ravel’s collection of waltzes was composed as a nod to Schubert and in it Ravel shows the range of his musical palette.

Stravinsky’s Three movements from Petrushka is the composer’s arrangement of music from his own ballet, commissioned by Arthur Rubinstein.

this is a colourful and enjoyable account [of Petrushka], well-characterised and full of dynamic contrast...fans of Kempf need have no qualms about acquiring this release.

Kempf opens with a beautifully-voiced and judiciously-paced view of Rachmaninov's Variations...he finds a meltingly silvery touch for the Ravel Valses (exquisite) before a return to the Russian repertoire that he plays so well, leaving us, thrillingly, in no doubt that the piano is a percussive instrument.

In Rachmaninov's Corelli Variations, Kempf distinguishes himself for assiduous, well-integrated tempo relationships between movements, and the easy command and intelligent, symphonically orientated delineation with which he shapes the composer's thick textures...Kempf's glittering technique, supple touch and extroverted demeanour in Stravinsky's Three Movements from Petrushka bring out the music's balletic roots

Kempf follows [Bach's] text faithfully, allowing each variation to shape the movement without sounding forced...[He] shows an impressive range of organ-like colour along with a pointillism that suits quick passages well...The scene of 'Shrove-Tide Fair' is a roller-coaster ride under Kempff's fingers, driven by a motoric energy that many pianists would find difficult to sustain over eight-and-a-half minutes.

Kempf’s command of the immense pianistic range to be found in Rachmaninov’s keyboard music clearly has few equals, and this set delivers at a stroke several jaw-dropping performances